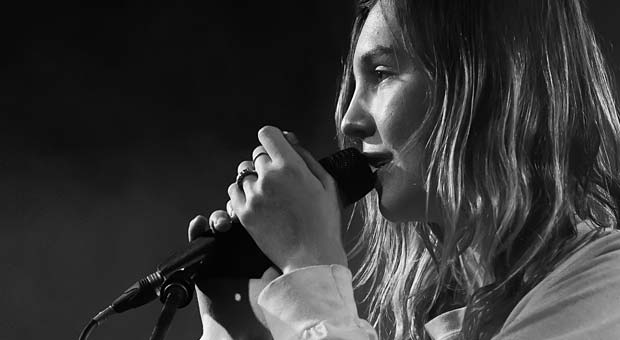 It looks like I’m a little late to the Japanese House party. Even though she emerged onto the pop music scene back in 2015, I’d never even heard of the Buckinghamshire-born solo artist - real name Amber Bain - until I had the privilege of seeing her live at the O2 Ritz recently.

Knocking on the door of The Japanese House at midnight, so to speak, at least I have the benefit of hearing all of the hot gossip after-the-fact. It turns out Bain chose a gender-neutral stage name in an attempt to stay anonymous, but instead it only served to stir things up - there were even whisperings that The Japanese House might be a secret side-project of The 1975 frontman Matt Healy - so she was soon forced to reveal her true identity. This definitely gives an intriguing element to the beginnings of Bain’s journey, even for an outsider looking in.

And I was in good company. The place was packed, and all eyes were fixed on Bain - fronting her band in a baby blue suit and playing a matching Fender upside down - whose quiet confidence and electronically androgynous voice hypnotised us all. As one, we began to undulate to the melancholy sounds of “We Talk All the Time” and “Lilo”, songs that anyone who has ever gone through heartbreak can relate to - and the fact that Bain and her long-term girlfriend recently broke up only added to the poignancy of her performance.

The pulse began to quicken towards the end with “Maybe You’re the Reason”, a song that explores Bain’s depression; the crowd’s communal voice rose as we each found a part of ourselves in her honest lyrics; I felt personally connected with her, as if she was actually sitting across the living room, serenading her guests.

After calling it her “last song for a long time,” The Japanese House ended on her new hit single, and the title song of her upcoming EP, “Something Has to Change” - a catchy, upbeat anthem that shares an essence with US sister-act Haim. The gentle lapping of the crowd quickly became a wave of arms and bodies that repeated Bain’s lyrics back to her with as much passion as she delivered them.

I left knowing I’d found a new favourite artist. Someone who epitomises our generation: a general sense of despondency - things aren’t going exactly the way we’d hoped - while also feeling vaguely hopeful, like maybe things will get better. Maybe we can make them better. Maybe.

For The Japanese House, at least, things are looking up. It’s safe to say Amber Bain has had one hell of a year - a year that has included no less than one hundred concerts around the world, as well as the release of her debut album Good At Falling - and I can't wait to see how she builds on this momentum in the coming decade.