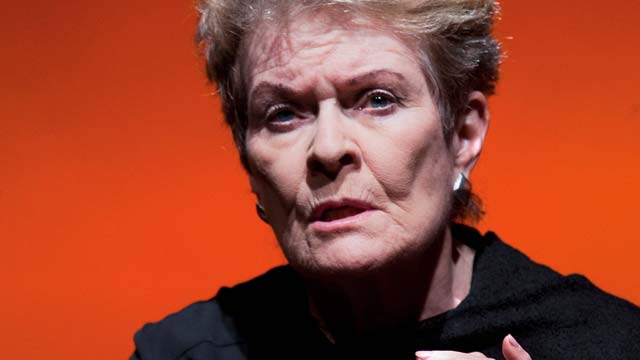 Martin Sherman's one person monologue, is heartwarming, funny and incredibly poignant. Dame Janet Suzman is a masterful stoyteller. So much so, that two minutes in, you will be completely mesmerised.

Eighty year old Rose has lived a thousand life times. We meet her at her Miami home, as she takes us through key moments, including her time in Nazi occupied Poland.

This is a memory play, and Rose has fragmented memories, so this is how we receive the information she provides. Sherman's evocative language creates a sense of claustrophbia and the character's wish for freedom, as Rose's odyssey takes her from place to place.

In a post Brexit/Trump world, there is no better time to see this brilliant play. Our heroine is displaced, but determined to work hard and provide for herself. This is in stark contrast with xenophobic newspaper headlines featuring migrants, which dominate every General Election Debate in the UK at the moment.

Richard Beecham directs with a nice steady, slow hand. The play never has a dull moment, as the staging and lighting create a sense of pace, illuminating Rose's pain and frustrstion, as well as wicked sense of humour.

Dame Janet Suzman never once drops the ball, from her facial tics through to the key moments she runs her fingers through her hair. She has amazing presence and versatility. Rose's take on life becomes yours, because of Suzman's terrific turn. She is Rose. You won't see a more committed performance in Manchester this year.

In terms of theatre, this is as good as it gets. So, if you have not got a ticket because you are expecting something slightly earnest and depressing? Rose has laugh out loud moments, high drama, and it grips you throughout and celebrates something we have seen in abundance in Manchester recently; compassion, resiliance and the strength of the human spirit.

A must-see play and a tour de force, from Janet Suzman.

Rose continues at HOME until 10 June. Info and tix are here