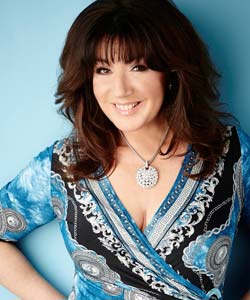 If all you know of Jane McDonald is that funny Yorkshire gal from 'Loose Women', then you need to find out more. This woman can sing. And then some.

From the opening acapella notes of 'One Voice' to the disco thumping 'Ain't No Mountain High Enough' Jane held the audience in the palm of her hand. Playing to a sell-out show at The Palace Theatre, Jane had us laughing, crying, singing and dancing along all night.

It came as no surprise that it was grannies and gays that filled the audience. Billie Jean, Belinda Scandal and Veronica Velkro were all spotted in their alter egos for a start....

Clearly they knew what the rest of the audience did.. that Jane McDonald puts on a show! Her rich and stunning voice melted over classics such as 'You're My World' as well as new song 'Singer of your Song'. Jane clearly knows her audience - especially in Manchester. Her first words were "I bet Canal Street's a ghost town tonight". She also treated us to a track from her 'Remixed and Extended' album.. the 7th Heaven Club Mix of 'One Night Only' [can you tell I'm a fan?!]

Seriously though, Jane is the consummate performer. She sings with passion and purity, and the cheeky, flirty [and sometimes a bit rude] patter have you laughing along too. This was once again an almost faultless show - the only fault was the never ending sounds of Werther's Originals being unwrapped.

'The Singer of Your Song' and 'Remixed and Extended' are both available to download now.