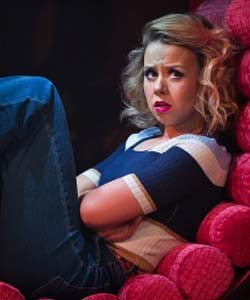 The likes of Marc Bolan, David Essex, and The Osmonds all had their faces adorned on pull out posters in the magazine, Jackie. It came out on Thursdays in the 1970s and gave young girls tips, quizzes, comic strips and was a gateway to see the latest pop stars. It’s hard to imagine how popular this mag was, in a world filled with new media, but the musical Jackie goes someway to fill in the gaps.

The title character is played by a well-known face, Janet Dibley and this helps anchor the piece. Her Jackie is a funny, cynical and exhausted fifty something, battling her way through modern life, about to get divorced and stuck in a dating minefield, with a teenage son in tow.

Cue – What Becomes of the Broken Hearted, and that’s the key to this show, really. The music and nostalgic references are so rose tinted, that the target audience applaud, clap and sing along. This is a show that knows the largely female audience and they recognise every small detail of Jackie’s life.

This does mean though, that there are many clichés, for example Jackie’s ex is dating Gemma, who is referred to as ‘Horse-face.’ What song could you possibly insert here? I know, Crazy Horses! Subtle, it ain’t!

The show also suffers extreme contrasts in tone, lurching from comedic (and there are moments of genuine hilarity) to earnest in one fell swoop. One scene in which the dancers seem to plant trees, in order for a park to appear on the stage, as a romantic setting – feels like an advert for the Woodland Trust.

At times, what the show lacks is the knowing and sharp comedy of the late Victoria Wood, because if anyone could have explored the awkwardness of the 1970’s meets the obsession with tablets and phones of today, it was this brilliant writer. Author of the book, Mike James does inject a great deal of comedy into the piece though, and Janet Dibley has a brilliant knack of bringing the jokes to life, with conviction.

Where does the magazine come in? Jackie is about to move and starts going through old boxes and there before her, lies her past. So, in a Big meets Sliding Doors moment, her younger self, played with relish by Daisy Steere offers innocent and naive advice.

Featuring hits such as Enough is Enough, Love Hurts, Puppy Love and It’s In His Kiss, the plot moves along from one hit to another. And, although it may not have the precision of Mamma Mia, or the back catalogue of the Jersey Boys, Arlene Phillips’ choreography is athletic and spot on terms of the era. Likewise the ensemble are all incredibly strong Michael Hamway, as Jackie’s son – David bring youth and energy to the piece.

It may beg, borrow and steal from other musicals – (there is even a rip off of Does Your Mother Know, from Mamma Mia featuring Lori Haley Fox’s Jill, in the guise of 20th Century Boy) but Jackie is a show that plays to its audience, and it does that incredibly well.

Jackie, The Musical is at the Palace Theatre & Opera House Manchester until 21 May More here.