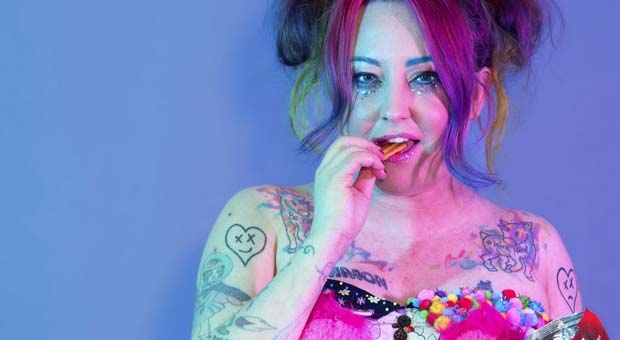 Mother’s Ruin: Speaks took place at Hope Mill theatre on January 18th as part of Turn On Fest. It was billed as a night of  glorious cabaret and performance by LGBTQ+ artists from Manchester and beyond, although variety might be a better categorisation. The evening was hosted by Jackie Hagan, and signed/described by BSL interpreter Kate Labno. It comprised 6 solo acts, some of which required voluntary and involuntary audience participation.

First off was Unhappy Jan, of ambivalent gender, whose novel entrance consisted of being dragged onto stage by means of a rope wielded by members of the audience from the front row. Starting out in a cleaner’s uniform, Jan narrated us through strong language encounters with neighbour Boris (and the subsequent water sports), before stripping down through various layered outfits to the minimum required for a family show, and inviting the audience to use his (by now visibly male) body as a human marker board for whatever they wanted to write. Banter, if that’s what it could be called, was deflected very well with a promise to use the suggestions in the next iteration of the act. All in all the performance was predominantly well received, but for me simply shouting expletives loudly didn’t cut it at the start, and the rest of it passed me by.

Next up was Clare Shaw, who started life in not so enlightened Burnley before ending up in ‘Ebden Bridge. Sincere self-denigration is a difficult thing to pull off on stage, but coupled with the understated humour it worked. Using her poems and short stories to provide details of life as it was (and is) to provide links, we were taken on a 20 minute bio-pic of growing up differently in Burnley through to her mother’s demise, via the floods that wreaked devastation in the Calder Valley and literally covered the place in shit. A fleeting encounter on stage (we weren’t privy to what it was about) provided laughter as Clare recovered her composure before ploughing on. It was a polished performance, and special mention must go to Kate for keeping up with the interpretation.

The first half ended with Jamaal Monarch, an energetic rapper who used the usual bending and bouncing about the stage, and accompanying gestures, to perform some tracks from his latest album, Audio Honey, and others. Each one was preceded by a sort of affirmatory warm up. The delivery was mostly as a diseur which allowed the words to come through – and they are well worth listening to – touching on issues such as infidelity (if you’re getting laid, why shouldn’t I?) that aren’t unique to those identifying as LGBTQ+. An artist worth exploring further.

After a brief interval we returned for the second half, where a few seats were now empty for some reason. It opened with Fat Roland, whose act put me in mind of Mr Pastry. It consisted of a sort of quiz, ostensibly LGBTQ themed – although the connection was cursory to say the least – where two members of the audience had to listen to musical themes and guess the answer to sometimes unrelated questions. It was amusing, especially when the final theme repeated itself. I suppose it was done well, but why was it done at all?

The last one up was Gerry Potter who shared his memories in prose and poetry, taking us back in time to when the Village was a bit earthier and Manchester really did do things differently – such as having 47 year old rent boys. Although affecting to be unable to remember a word, he was, of course, word perfect and spoke with a sincere passion that can only come with having been there via booze, drugs, sex, dancing. He was good – nothing else needs to be said.

The evening closed with Jackie giving us some sound advice – the item that sticks in my mind is that the minimum fill line on a kettle is for real – and removing her prosthetic leg. This allowed her to pour wine into it and drink from it, and also use her stump to close the evening by painting eyes on it and bringing it to life. At other times in the performance we were treated to descriptions of her hospital companions, particularly Edna who resembled a bald tennis ball with eyes. She held the evening together very well.

A final major mention must go to Kate for keeping up with the interpretation so well. I now know how to represent genitalia in sign language – a social skill that you never know when you might need it.

For details of the next Mother's Ruin evening hosted by Jonathan Mayor, click here

More about Turn on Fest.