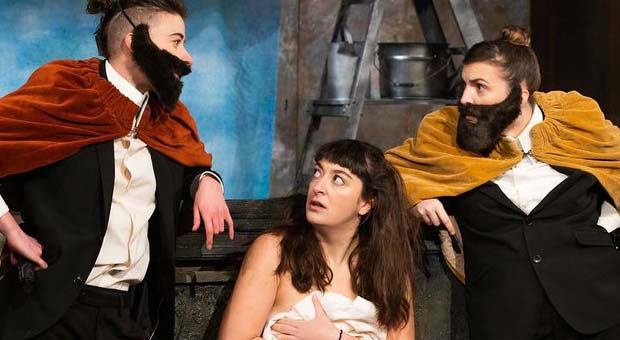 Breach Theatre’s It’s True, It’s True, It’s True - which I saw at HOME in October 2019 - is a dramatisation of the 17th-century trial of Agostino Tassi, a painter to the pope who raped Artemisia Gentileschi, the first woman ever to be admitted into the Florence Accademia.

Sticking closely to the transcripts of the 1612 trial (which were used as source material), writers Ellice Stevens and Billy Barrett show the audience just how Gentileschi continued to the bitter end, desperately trying to convince a court of men the truth of her accusations.

This piece is very relevant in the age of #TimesUp and #MeToo, and it truly does show that public attitudes towards women really haven’t changed much in 408 years. Gentileschi lived in an era when it was not acceptable for women to paint, and was therefore oppressed throughout her life. Even for centuries after her death, people just couldn’t believe that a woman had such creative talent, and actually falsely attributed her works to her father. And during her trial, the burden of proof was always on her, the victim, rather than the perpetrator Tassi.

The most eye-opening part of this piece is how similar Tassi’s strategies of defence were to those of men accused of similar crimes today - from accusing his accuser of being promiscuous to trying to invalidate her testimony, to more direct methods of bullying.

Though angering, I never felt like I was being hit over the head with the injustice of it all (though I am definitely ashamed to share a gender with the men who conducted that trial). The play doesn’t solely focus on the ignorance of men; instead, its message is about the strength of women. And it is truly empowering. No man would ever be subject to such degradation, humiliation and punishment, and if they were they would not be able to endure it. Like pregnancy, there are certain things only a woman’s will power can overcome. And so although the conclusion of the trial was tragic and more negative than I could ever have imagined, my tears were not bitter, and the edges of my lips were curled upwards; I felt rejuvenated by the strength and power of women.

Directed by Billy Barrett, the staging is designed as part-courtroom-part-studio, which works really well to remind the audience just how important art was in that world, how important it was to both Gentileschi and Tassi.

Two of Gentileschi’s paintings - Susanna the Elders and Judith Slaying Holofernes - are also incorporated into the play, described and enacted by the performers. These moments are a refreshing diversion from the static scenes of the trial, both humorous and poignant, making it clear that her art was how Gentileschi vented her unquenchable rage about the horrors she was forced to suffer.

I love this play. It does everything a piece of art should, for “art, at its greatest, tells the truth and makes it possible to bear it” (I can’t remember where I read that). The performers cannot be praised enough, and the directorial choice to make the characters present-day caricatures (at least in accent and tone of voice) make it all the more relatable. It is both moving and hilarious; I would highly recommend it to anyone.

A filmed version of It’s True, It’s True, It’s True, specifically staged for TV and originally broadcast on BBC 4, is available online until the end of this month; and Breach Theatre have made their first production, The Beanfield, free to view online as well.