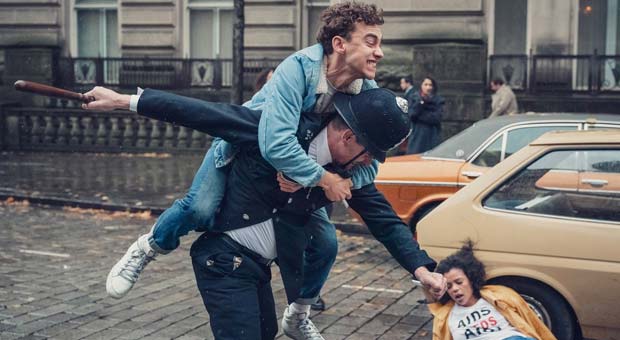 It's a Sin premier episode.

20 years on from Manchester’s iconic Queer as Folk, Russell T Davies’s new drama, “It’s a Sin” (Channel 4), is of the same extraordinary beauty, representing different stages of exploration and embracing life.  However, what Queer As Folk did not do much of, was look at the darkness out of which such freedom had emerged and didn’t deal with the effects of Aids on the gay community.

The trio arrive in 1981, just about the time first reports of a new and puzzling disease are making their way to the UK via our National press.

Ritchie has left a loving, home in the Isle of Wight to study at university.

The terror in his eyes when his mother says she’ll go through his room and redecorate is palpable and leads to a very hurried removal of magazines etc.

Again, how many of us have been there?

Roscoe is Peckham born with Nigerian roots, and doesn’t care what anyone thinks of him and is not afraid to show it as we quickly learn.

Roscoe is the odd one out as his secret gay life has been discovered already. Mother is seen brandishing a copy of Gay Times, and the family are trying to pray away the gay. He escapes, nay, flounces out, with money from his sister, and the cackling from the two elderly aunts who hitherto have been fervent in their supplications is hilarious.

Colin, from the Welsh valleys, is quieter, excited by his new job at a tailor’s and is soon befriended by the older Henry (Neil Patrick Harris), a kind, man who, we learn,  has been living with his life partner, Pablo, for 30 years.

The depiction of Colin moving from living at home in Wales into a rented shared room with communal facilities was spot on. I did just that (from Oldham to Edgware in 1977), and it didn’t last long either as it was just too suffocating.

As the story unravels, we are happily introduced to a group of friends, who introduce them and us to the thrilling and hedonistic scene that is the London gay scene.

Ash (Nathaniel Curtis) seemingly doesn’t carry any emotional baggage and is studying drama (at the same college as Ritchie which is how they meet) so we don’t get too much of his history, but he and Ritchie get it on (so to speak) and I’m sure more of his past will be revealed.

Finally we have Jill (Lydia West) who ends up housing them all in her flat, the so-called Pink Palace. She starts out as a friend to them all, but ends up rather more.

This is no better demonstration of the hedonism,  than with the number of short vignettes containing a flurry of sexual dalliences mostly involving Ritchie.

Henry and Pablo both fall ill at the same time with … cancer? Tuberculosis? Pneumonia? Everyone is playing a guessing game.

Davies cleverly recognises that, as in life, tragedy and humour are frequent companions. Indeed his use of levity serves to emphasise the gravity surrounding this unkown and misunderstood disease.

Think of Henry launguishing in hospital “You haven’t got a parrot though, have you?” says Colin. “Of course I haven’t got a fucking parrot,” replies his doomed friend around the mistaken diagnosis of the lung disease psittacosis.

The Harris monologue about the 'mould patch in the kitchen' is just one example of the wonderful writing contained throughout.

The Hospital scenes too,  are a harsh reality of the early days of the AIDS epidemic and provide a striking similarity to aspects of the current crisis.

Davies does not shy away from the political and social homophobia and hostility of the time, leaving viewers to react angrily at the hatred others can dish out, leaving us to question where some people’s humanity truly lies. However, by the end of the first episode, the group have created their own family and moved into their “Pink Palace”.

The first episode (and we suspect also throughout the series) is littered with recognisible Manchester locations, albeit in some cases with different names.

In all cases they serve to remind us that in a lot of instances some things haven't changed at all in 40 years.

Having lived through those times though, it does all come flooding back, and the main memory (hinted at by a neighbour towards the end of episode 1) is that tolerance is not the same as acceptance. The closing music (Bronski Beat’s Small Town Boy) was a perfect choice.

So… back to the present.

Although It’s a Sin is being billed as not an AIDS drama, I do wonder if the current pandemic hastened the series’ production, It certainly throws up parallels with it in quite sharp relief.

Like Covid-19, which was carried across from bats, AIDS was zoonotic in origin and crossed from chimps to humans in Zaire (now the Democratic Republic of Congo), so the route should be well understood.

Like then, we have large groups of people saying the response to Covid is out of all proportion to the risk of contracting it, and we have others who are saying nothing is too severe when trying to get the virus under control. Both sides of the argument have some merits, but back in the ‘80s AIDS was being called the Gay Flu as it targeted (or seemed to target) gay men in particular, leading to other groups thinking they were immune. They weren’t, but hindsight is a wonderful thing.

The main difference, of course, is how the two viruses are transmitted, and Ritchie’s hurling of the packet of condoms (given to him by his father so he doesn’t get someone “into trouble”) into the sea might yet be prescient.

It took decades for a cocktail of drugs to bring HIV under some sort of control and prevent AIDS developing. Perhaps a lesson has been learned here as we now have several vaccines.

What Davies has created is a masterpiece that explores queer culture of (scarily) 40 years ago; a drama that documents an important era; a story that demonstrates how far we have come; a narrative that the younger queer generation are removed from. All of this makes “It’s A Sin” essential viewing not only for people exploring and educating their own LGBT history, but beyond…. “La”.

Dare we say that It's a Sin is one of the most important TV dramas for years.

If you want to binge on the whole series you can, but I chose the slow approach. Either way, it’s a brilliant look back at the way we were. Watch it.

And by the way, for those of you unfamiliar with the legend that is NANA MOUSKOURI she is alive and still performing with more here  https://en.wikipedia.org/wiki/Nana_Mouskouri

(La is clearly the new expression that we will all be frequently hearing when next we are all together).