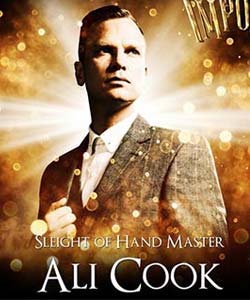 A magic show for all ages, Impossible is a great family night’s entertainment full of tricks old and new.

Lots of willing (and unwilling) volunteers are brought to the stage to take part in the many illusions showcased before us. Josephine Lee opens the show with a daring bed of spikes routine; Lee Thompson entertains with his sleight of hand comedy; Chris Cox (Sue Perkins lookalike) impresses with his comedic ‘mind-reading’ skills; Ben Hart acts as narrator and performer, taking us on the journey of magic through the ages; Magical Bones, hip hop street magician extraordinaire, astounds us with his card skills and disappearing £20 note; Jonathan Goodwin certainly lives up to title of daredevil and escapologist – large stage illusions including crossbows and fire. When he set himself alight for a triumphant display of escapology I could feel the heat from the flames on my face in Row G.

A roaming microphone and camera (projected onto the big screen) ensure we see and hear even those sat at the back of the stalls, and capture a particularly cute moment of young audience member Sam sat with Ben Hart on the stalls aisle floor closely watching classic close-up rope magic.

The only disappointment was the lack of a big finish - the programme shows a full sized car on stage. Did Manchester miss the opportunity to see a grand finale?

This is a polished show that does make you question what you have just seen. I was particularly impressed by the £20 note routine and the Act I finale. How did that get there? Where did that come from? How did they do that? That’s Impossible!