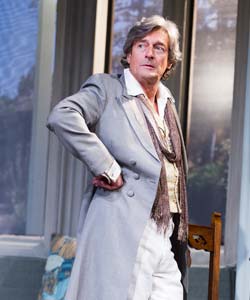 Importance of being Earnest

The Importance of Being Earnest

LIGHT AND FLUFFY BUT A LITTLE CONFUSED

This re-imagined production of Oscar Wilde’s 1895 classic sees a cast of West End stars join together as The Bunbury Company of Players: a group of older amateur actors who have revived their cherished performance of Earnest so many times that their own characters have become interlinked with their Earnest counterparts.

Whilst the cast camp it up as the old school am-drams enjoying yet another revival of Earnest, the twisted plot misses the mark. This is a final dress rehearsal set in the sumptuous home of George and Lavinia (the first time I have seen a full ceiling on stage rather than a lighting rig!), where interaction from the actors is intertwined with Wilde’s story. Some strong performances ensure an enjoyable evening - I particularly enjoyed the two-hander between Cecily and Gwendolen in the 2nd half - but the new plot was confusing and added little to the production – Noises Off does it so much better.