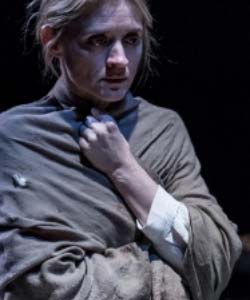 Husbands and Sons at The Royal Exchange

Have you ever sat on a bus or restaurant and listened to or watched several people at once, eavesdropping but pretended that you are staring into space?

Well, Marianne Elliott’s production of Husbands and Sons invites you to do exactly that, due to Ben Power’s mighty adaptation of three DH Lawrence texts combined into one magnificent play. Anne-Marie Duff is the leading actress, in terms of marketing but there are so many wonderful performances here, that you may also come away fans of everyone else.

The concept should not work, as you are often watching one set of characters speak and interact, whilst another family appear opposite or behind them moving or doing domestic chores. But, it fits perfectly with the theme mining and the devastating effects it has on the family, in terms of fatigue, fear and feelings of quashed dreams, hopes and desires.

The Holroyds are a typical mining family and even though Charles (Martin Marquez) acts outwardly as head of the house, his wife Lizzie (the brilliant Anne-Marie Duff) is the one who holds things together, in order to keep her young son, Jack stable.

The Lamberts, likewise are held tightly by Lydia (Julia Ford) who’s devotion to her son Ernest (Johnny Gibbon) overwhelms both of them. Seeking a better life than his father, Walter (Lloyd Hutchinson) – he is bookish and serious and his mother wants more for him than a life in the pits.

Joe Gascoigne (Joe Armstrong) has lost his father to the mines, and he is a volatile, yet frightened man. His wife – Minnie (Louise Brealey) is attracted to his magnetism but is not convinced that he loves her. This fiery couple argue and fight and then he goes to work, leaving her to worry if he is going to come back.

This Northern epic play is three hours long and, although it is a tad slow in the first half – it does have immediacy and you are drawn in and final scene ends on a compelling, yet sombre note. During a time when men were seen as the breadwinners and women kept things ticking over at home, the frustration etched on every character’s face is incredibly poignant, as they are all ‘stuck.’

Anne Marie-Duff is as magnetic as you might expect, but her gift is non-verbal performance; her pain is written all over her face and hers is a stunning turn. Sue Wallace, as her mother in law conveys grief with so much conviction; you will feel moved to tears.

Johnny Gibbon’s Ernest may have more hope, but the actor brilliantly explores the fact that his character is in a claustrophobic environment, akin to the pits.

Husbands and Sons is a brilliant play, as it captures a time when women were lynchpins but never receiving any credit for keeping everyone else sane.  It is not the most upbeat production you will see, but it is the better for it, as it conveys so much, that you will shed a tear many times.

And Anne Marie-Duff’s towering turn is worth the ticket price, alone.