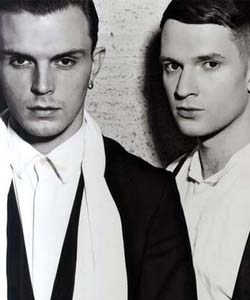 Homecoming Hurts
Theo Hutchcraft and Adam Anderson, who famously met during a brawl outside Manchester’s 42nd Street in 2005 return ‘home’ for the first time in over two years. With a (sometimes tricky) second album, Exile to boot, a seemingly more than packed out crowd are ready for the boys.

Opening with the title track of the new album, which channels all the grandeur and dramatics of Muse, we are treated to a brilliant setlist that doesn’t over-indulge on new tracks (we get most of debut album Happiness too).
Recent single Miracle has the makings of a Coldplay stadium anthem all over it and Blind is appreciated more due to the irony that Theo was almost blinded during the video shoot, requiring extensive surgery. The Road follows the slightly new direction of the follow up album which veers into guitar driven territory (shock horror) but the subtle electronica is never far away.

An acoustic version of Somebody To Die For is a particular highlight from the new set. Old classics like Wonderful Life, Silver Lining and especially Sunday really take off. They finish predictably, but approvingly with Better Than Love and emotive signature closer, Stay, with everyone aiding vocally of course.

The crowd though in full voice is a little restless at times, perhaps due to the fact that the venue seems a little over-sold. This could be because of the Bank Holiday timing: only having the tiny inside bar open meant the crowd couldn’t really move. Regardlessly Hurts put on a near perfect show. Vocally brilliant as always, Theo is a great front-man (though he doesn’t interact with the crowd so much this time) and Adam is happy mostly lurking under the brooding lights.
Hurts return to the City later in the year and hopefully by then, the UK will have started appreciating them as much as our European friends do.