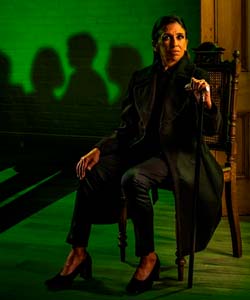 Lorca’s final masterpiece is a bitter and darkly comic tragedy that charts the tyranny, jealousy and desperate struggle for freedom that will tear Bernarda and her daughters apart.

The House of Bernarda Alba

Originally performed in 1945, Lorca’s final play – The House of Bernarda Alba – centres on events following the death of Bernarda’s second husband and the tensions between mother, daughters and staff. Decreeing an eight year mourning period she seeks to control the lives of her five daughters, confining them to the house and forbidding all male contact.

This co-production between The Royal Exchange and Graeae Theatre Company (who specialise in the creative integration of sign language, audio description and captioning) is directed by Graeae’s Artistic Director Jenny Sealey. The bleak staging sets the bulk of the action within a central section of the stage, echoing the claustrophobia of the confined daughters; the distorted chairs echoing their disabilities.

Kathryn Hunter is feisty as the matriarch with her ever watchful eye. One minute she’s frail; the next fiercely rising up with her silver-topped cane to set the sisters against each other. However, her power, at times, is weakened by the multi-level communication displayed by the sisters: the asides expressed in sign-language; the confusion of who’s speaking/signing for whom.

There are moments of humour, but ultimately this is a dark story with an inevitable end. The all-female cast convincingly portray the challenges of confinement, sexual tension and sibling rivalry, and the second half picks up the pace after a slow first hour. However, the production as a whole needs to get into its stride; this is a limited story that burns very slowly. The heat needs to rise a notch or two to really engage the audience.