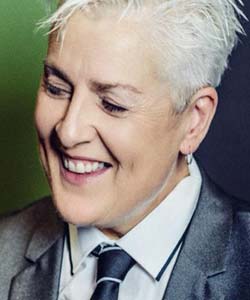 Horse returns to Band on the Wall

Having never heard a single Horse song and knowing very little about her I wondered if I was actually the best person to review her show at Band on the Wall last night.

I was surprised to see a very mixed audience. I had (wrongly) assumed that she would draw a predominantly lesbian crowd.

The crowd were enthusiastic and there was more than a smattering of die hard fans judging by the number of people who knew all the words to the songs. Old favourites were greeted with delighted cheers, at one point causing many of the fans to leave their seats and dance in the aisles.

Horse is a seasoned performer, that is evident. She was witty, engaging and appreciative of her audience.

She is passionate about her work, telling the listening throng the stories behind the songs. To the uninitiated, like me these snippets were welcome, giving an insight into the psyche of the writer. The stories behind the songs "The Unwanted Child" and "Oh Never, No, Never" were heartbreaking and it was evident she had been moved by her research and the writing of the songs. This was clear also by the way she performed them.

She has a raw, passionate voice and when it's needed it's soft and lilting.

A real treat for the ears.

At the end of the performance she stayed around meeting and greeting fans, signing cds, posing for photographs. She didn't leave until everyone was happy. A rare and unusual quality in the modern age.

In all, a successful evening for everyone involved.

As for me....I'll end where Horse started the evening...."Never Going To.....who could help but be won over"

For more Band on the Wall events.