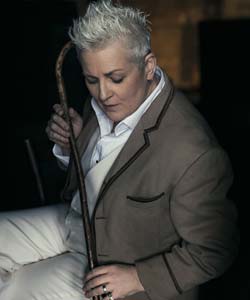 Horse is back on the road following a successful run of herself penned autobiographical play, Careful at this year's Edinburgh fringe. This is a relatively short tour ahead of her setting off for a 3 week tour of Australia.

Considering she set off on the long drive south earlier today, she is full of energy and, as you would expect, in very fine voice indeed.

It's almost 12 months exactly since she was here at Band on the Wall when she played to a very appreciative crowd.

Old favourites Like Dictate the Speed of the Beat of My Heart are greeted with cheers and Ghost and Wild As the Wind were particularly well received by her very loyal fan base. It is testimony to the intimacy of the venue that her raw emotion can be felt in every song.

She continues to be an LGBT pioneer and has teamed up with Stonewall. There is a section in her set of 3 songs which specifically focus on bullying. A collection bucket was available at the end of this and the other 2 forthcoming gigs for people to make a donation to continue the sterling work carried out by Stonewall, an organisation close to Horses’ heart.

She personalised the concert by dedicating a song to a couple of fans who were celebrating their anniversary and a special mention to a longstanding fan who had recently lost their partner. These two very personal acts show how in touch with her fan base she is.

As always, Horse stayed behind at the end to have photographs taken and to chat to her fans, something sadly lost by many of today's stars.

Although it's likely to be another year before she revisits us on tour, she will be touring with Careful early next year.

And finally a mention in dispatches for Horses very capable opening act, Sandra Macbeth, a fellow Scottish singer-songwriter whose enthusiasm and banter warmed the crowd up nicely ahead of the anticipated main event.

For more about Horse.

Check out forthcoming events at Band on the Wall.