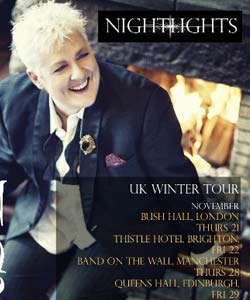 Horse at Band on the wall

For those less familiar,Horse is a Scottish female singer-songwriter celebrating many years in the recording industry. She has a wide following in the UK and worldwide and has toured with Tina Turner and secured several record chart hits in Europe.

She is noted mainly for her rich, sonorous voice, and The Scotsman referred to her as 'one of Scotland's all-time great vocalists, also possessed of a keen songwriting intelligence'.

Thursday night she made a rare live appearance at the legendary BAND ON THE WALL supported ably by Sam Dickinson a young singer from the North East.

I have always had a theory that great singers really show there expertise when they cover songs associated with other great performers.Horse at Band on the Wall did just that.
The venue firstly,again demonstrated its real acoustic strength and Horse certainly rose to the occasion too,with her extensive vocal range.

A performer for some 30 years,Horse has known many highs in her career and has worked alongside legends such as Tina Turner. Her opening rendition of Lyndsey Buckingham's 'Big Love', really kicked the evening off in some style and she undoubtedly brought something new to this classic.

Horse,then treated us to many of her own compositions from her 9 album catelogue spanning a two decade recording career.
An adoring and clearly knowledgable audience were treated to powerful and emotional versions of 'Breathe me', 'forgiven''ghost',and 'bring him home'.

Her final song,was a version of the Lady Antebellum smash 'need you now' and boy did she make it her own.

Ably supported by her talented quartet of musicians, all of whom genuinely seemed to be enjoying the whole experience too.
For more information.Please visit the website here.

For forthcoming gigs at Band on the Wall visit here.