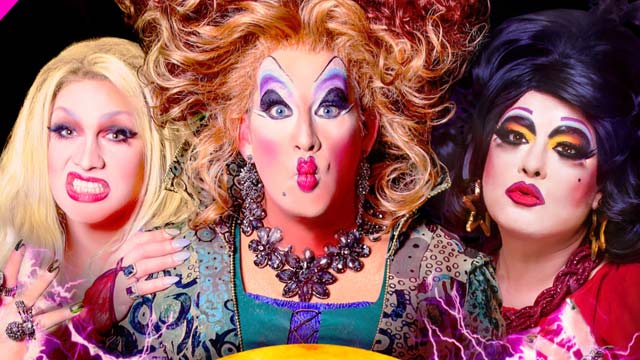 So there seems to have been a cult going on that totally passed me by. That cult being the 1993 Disney film, Hocus Pocus. Until a couple of weeks ago I was oblivious to this film and it’s campy appeal but all that changed when I heard the great Peaches Christ and RuPaul’s Drag Race favourite Jinkx Monsoon were coming to town with their version of this classic.

On a rainy Sunday afternoon I took my research very seriously and had a duvet day learning about the Sanderson Sisters and I was glad I did so I was prepared for their reinvention as the Manderson sisters before our very eyes in Hocum Pokem which came to the Contact Theatre this week.

It was 90 minutes of pure, unadultered fun and my face was actually aching from smiling and laughing by the end.

Peaches Christ totally owned the stage as Winnie Manderson, the leader of the coven who is seeking eternal life. Her stage presence was fantastic and even though it was her production, she knew when to let other performers have centre stage which I think is the mark of a true professional, even though she was totally in command of the audience.

Peaches is a huge figure on the West Coast drag circuit but Jinkx Monsoon has international bums on seat appeal thanks to her winning appearance on season five of RuPaul’s Drag Race. She didn’t disappoint with some great musical numbers and an amazing voice.  There were the requisite number of Drag Race puns in there but not so much that they laboured the point.

It’s hard to think that Jinkx is just 30, I think we’re going to see so much more from her as a performer, particularly paired with Peaches. This truly is a match made in heaven (or hell depending on your viewpoint) and I would recommend getting tickets for any show they bring to these shores.

The third spoke in this comedy wheel was the UK’s very own tranny with a fanny, Holestar. She is a leading drag performer in London and I can’t help but hope that she comes to Manchester again, she was amazing. Her version of Proud Mary proclaiming herself as a female drag queen was hilarious and she played perfect foil for the other two established characters. You would never have known it was her first night in the role.

As back up there was a ton of our homegrown talent. Firstly, Manchester’s adopted daughter Kate McCabe was “most excellent” as the unwitting virgin who releases the Manderson sisters. Plus Anna Phylatic, Miss Blair and Liquorice Black were on point and looked fabulous.

The only slight gripe I would have is that the production moved incredibly fast and if I hadn’t seen the film beforehand I probably would have struggled to understand what the hell was going on, so do your research people, even if it’s a quick Wiki search on the plot line.

That’s a minor thing, the sheer energy and ad-libbing was brilliant, especially when a few bits and pieces went wrong. Sadly the production has now moved to London but Jinkx in particular is returning with “The Vaudevillians” at the Contact Theatre.

Let’s hope that Peaches and Holestar will be gracing us with their presence again soon.