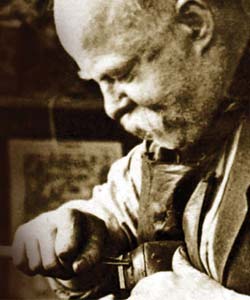 It is always a pleasure for your Correspondent to take the short trip from Canal Street to the Oldham Coliseum Theatre.  The history of the theatre can be traced back to 1885, and it is abundantly clear to any visitor the theatre is loved and cherished its performers and its staff and its many volunteers. The Theatre’s interior makes it a great period classic in theatre terms, and this is certainly with the current production of “Hobson’s Choice” by Harold Brighouse.

Hobson's Choice (meaning no choice at all) is set in Salford in 1880. Widower Henry Hobson is struggling to handle his three grown-up daughters, each seeking a husband and an escape from the family-run boot makers shop. But with Hobson spending more time at the pub than on the business of boots and clogs, the future prosperity of the family firm is held in the hands of his eldest daughter Maggie.

When Maggie sets her sights on talented boot maker Willie Mossop it’s the beginning of an unlikely partnership that could threaten the future of Hobson’s trade.

Thanks to Will's skill as a boot maker and Maggie's business acumen, their own shop is very successful and, within a year, they have taken nearly all of Hobson's trade. Hobson is almost bankrupt and drinking himself to death.

After an attack of delirium tremens, he asks each of his daughters to look after him. They all refuse, but eventually Maggie agrees to do so provided that Will takes over his business, with Hobson remaining as a 'sleeping partner' only.

Premiered in 1916, Brighouse’s comedy, has earned a reputation as a mini-masterpiece.

This most recent production in association with the Octagon Theatre, Bolton and New Vic Theatre, Newcastle-Under-Lyme is directed by David Thacker is suitably gritty, examining the play’s mix of northern domestic humour and the socially contentious issue of women exercising power and authority over men.

A solid performance comes from Maxwell Hutcheon as patriarch Henry Hobson, convincingly portraying a stalwart struggling to control his wayward daughters.  Though he might have made more of the comedy between he and his daughters in the earlier scenes.

The stand out performance comes from Michael Shalford who is utterly charming as Willie Mossop.  During the course of three acts, he is utterly transformed from lowly boot maker into businessman and a husband.

Shalford was surely born to play Mossop and somewhat steals the show.

Of course, such transformation comes only due to the tenacity and fortitude of Maggie Hobson.  Natalie Grady gives the eldest daughter a suitably aggressive air, holding the entire household under her thumb, but demonstrating real vulnerability when her northern grittiness crumbles on her wedding night.

The supporting characters are solid, although the daughters in the earlier scenes with Hobson take a little time to get into their stride.  The production design and lighting is simple but effective and complements rather than overpowers the action.

With a feisty and humorous approach, Hobson’s Choice leaves the audience no choice at all but to laugh and cheer as early girl power is brought to the forefront in this hugely popular, gritty comedy.