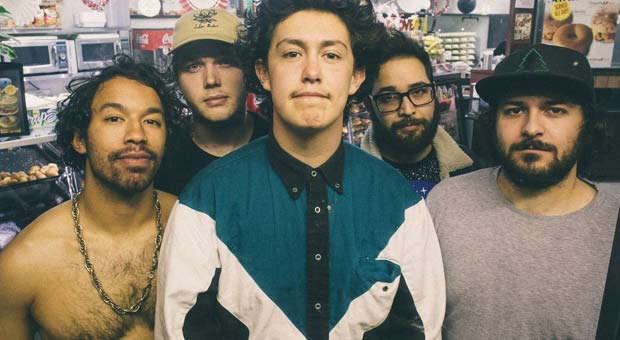 Hobo Johnson and the Lovemakers @ The Academy

Hobo Johnson and the Lovemakers are a unique 6-piece group. Their frontman was left homeless and had to live in a car in 2015 where he wrote his first tracks, but when those tracks reached the public everything changed. A recent explosion in popularity from their 2018 video “Peach Scone”, which has been streamed over 50,000,000 times, saw them go from playing to small crowds to filling venues such as The Academy in Manchester with hundreds of fans turning up early to ensure they get a good spot. The excitement of the crowd waiting for Hobo Johnson’s appearance on stage was palpable. Over two thousand people screaming the lyrics to S Club 7 and Anastacia songs as they waited for the band to finish their set up, was quite the spectacle.

From the moment they stepped on stage, throwing roses into the crowd, it was clear this band was no one-hit-wonder. We were treated to energetic spoken word over a live band that gave us elements of hip-hop and indie punk in a unique mash-up that instantly injected a shot of adrenaline into the room. Everyone in the room knew every word, screaming them back seemingly louder that Hobo could sing through the sound system.  Huge bursts of energy would erupt during the intense almost metal-like choruses followed by calm lulls with gentle piano arpeggios, simple beats and meaningful poetry. You could feel the emotion radiating out from Hobo Johnson as he went from gentle and sounding like he was about to cry, to screaming as he unleashed pent-up frustration and anger. Hobo told us about his family troubles, about love, he even touched on politics and the start of all life as we know it. This band took you from jumping with excitement to losing yourself in the deep meaningful poetry several times within each song.

Hobo Johnson couldn’t stop smiling as the audience sung parts of “Sex in the City” for him. Seeing an artist become giddy with happiness is heart-warming, especially considering the hardships he has gone through to make it to this point. He went the extra mile to please, extending songs like “Three percent” with new lyrics adding even more depth to the stories he has already built up in his album, “The Rise of Hobo Johnson”. Halfway through the set, when the audience requested Wonderwall, he politely declined. Instead, he gave us a cover of his favourite song from 2004 “Since U Been Gone” by Kelly Clarkson. This unexpected cover reinvigorated the crowd as cascades of flashing, pink and white lights filled the room as they played a captivating rendition of the song in their own distinct style. The Lovemakers, the band accompanying Hobo, provided an amazing musical foundation for the lyrics. When Hobo was yelling the band exploded with the energy of the loudest punk band you could imagine and when Hobo was whispering, they provided elegant and soothing sounds to help calm you before the next burst of energy. All of this perfectly accompanied by a light show that captured these moments in a flurry of pink and white or a calm, relaxing blue depending on which emotions the music was portraying. Finishing on their viral song “Peach Scone” Hobo Johnson and the Lovemakers satisfied their fans’ craving for that viral hit. This song really framed them as a group of good friends that love music putting their all into a weird, but wonderful rant about the friendzone and everyone loved it. Afterwards, the band rewarded their fans with even more roses before disappearing and sadly not performing an encore.

Hobo Johnson and the Lovemakers combine spoken word and hip-hop with large dashes of punk rock in an initially confusing, but quickly loveable fusion. Hobo Johnson’s endearing personality and performance just make you want to see and hear more of his stories. A unique performance that you need to experience if you’re into hip-hop or looking for a new genre. These guys are fresh, energetic and sure to continue to grow their fan base as they move onto Glasgow and Ireland.