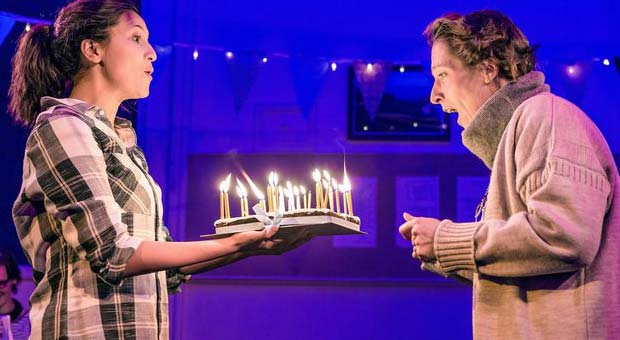 Here I Belong, written by Matt Hartley, is a touching tale of identity and community that centers around Elsie - played by Beatrice Curnew, who seems to literally age before your very eyes - as she prepares her village town hall for four events throughout her life. In each of the four scenes, Elsie has a lengthy conversation with a different person - all of them brilliantly portrayed by Nathalie Barclay.

Spanning over 60 years, these conversations feel authentic while exploring a number of themes relevant to each era yet still relatable today (such as women’s rights post-WWII or gentrification at the dawn of Thatcherism), as well as enough village gossip to make you feel like you’ve lived there most of your life yourself. With the large jumps in time, we see the extremes of change that English villages have undergone in recent generations; yet the decision to have Barclay play four roles gives you the sense that nothing really does ever change in such a close community.

Elsie is originally an outsider, moving to the village during the war; so the theme of belonging is prevalent in her life. Yet even at her most apprehensive, as when organising a party to celebrate the Queen’s coronation in the first scene - her first party as chair of the village committee, no less - a certain strength still radiates from within her. Her courage in spite of fear is underlying in every scene: despite the fact that Elsie experiences a lot of loss and change over the years, as we all do, the overall message of the piece is hopeful. The primary symbol of this hopefulness is Elsie herself, who retains a certain gravitas even in later life.

My personal favourite is the third scene, in which Elsie meets the boisterous Scarlett - a banker’s wife from London who recently moved into “the Big House” in the village with her husband. Though initially coming across as a basic caricature, we (and Elsie) are soon taught a lesson in preconceptions as Scarlett develops and deepens into a lovable character.

Though staged cabaret-style, this is not an immersive performance; instead the audience occupy circular tables around the hall as the actors roam around and squeeze between them - they are neither part of the show nor are they ignored. This makes the performance intimate, if occasionally bordering on claustrophobic.

The direction is simplistic and secondary to the writing, which is sensitive and sentimental without being sickly. The majority of action comes from the preparation of each event - particularly blowing up helium balloons for a child’s birthday party in the second scene, which although giving the actors enough ‘business’ to last, does eventually become somewhat distracting and tedious. The performances deserve a special mention; each actor plays such a diverse range of roles with care and skill.

Unfortunately there isn’t enough conflict for the play to be considered thoroughly entertaining, and at times the pace can feel as slow as actually living in a village, but Elsie’s emotional journey is enough to keep you interested and engaged. The recording itself is rather basic, and the audio is inconsistent, but it never feels difficult to watch. I’d recommend this to anyone familiar with rural life, or those that are looking to ease into theatre.

Here I Belong was the first in a line of productions that are being released every Friday at 2pm by Pentabus Theatre, all of which are still available to watch online for free.