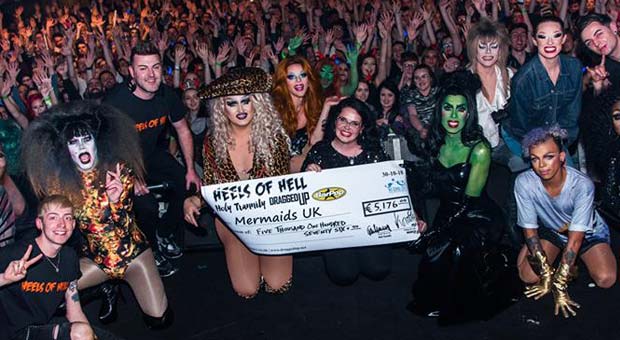 In what has become an annual event Halloween was once again marked by a Spooktacular gathering of drag queens bought together by Holy Trannity. Heels of Hell this year was one of the best yet with a huge array of queens with local UK talent and the stars of Rupaul’s Drag Race taking to the stage.

Sharon Needles, Alaska, Willam, Latrice Royale, Jinkx Monsoon, Ivy Winters and Aja are some of the most popular queens to emerge from the talent show and they were all brought together to deliver a fantastic night of entertainment.

We were fortunate to have meet and greet so got to meet some of the stars of the show before the night got started. All the queens were great, but I must give a massive shout out to Sharon Needles who took the time to talk to every single person who queued up to meet her even when the meet and greet was coming to an end.

As well as the huge level of entertainment the show did not shy away from delivering a message. Our trans friends often receive the most derogatory treatment, whether it is by certain elements of press in this country or by politicians in the US so it was good to see the queens highlight this and for Holy Trannity to be raising funds for trans charities.

The show itself was polished and had a good run time with break in the middle. Heels of Hell delivered a versatile mix of entertainment whether it was dance numbers from Wicked or comedy from all the queens. Sharon made for an excellent host which helped the show keep moving.

Definitely a fantastic night and we are looking forward to all the shows that are coming up, the next show is the ABCD show featuring the finalists of Rupaul Season 6 on the 2nd December.