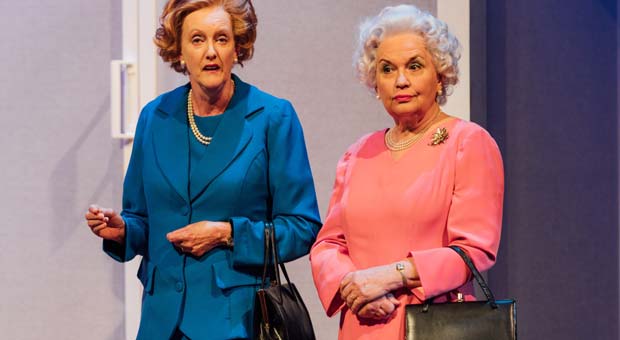 Handbagged is a play first written in 2010 ( albeit much shorter originally, as part of a larger production about women and politics ) and is, at its heart, an assumption about what actually went on during regular weekly meetings between the Queen and Mrs Thatcher whilst the latter was Prime Minister 1979 - 1990. Traditionally no records are kept of these meetings and they are totally private, so any background was gleaned from extensive research of biographies and political interviews and the rest is imagination.

The play follows the meetings in chronological order, and political and social events are referred to, with 2 other actors ( Jahvel Hall and Andy Secombe ) appearing as several supporting characters, from Denis Thatcher and Prince Philip, to the Reagans, Gerry Adams, Neil Kinnock, Kenneth Kaunda, and the palace butler, doing a superb job and providing much hilarity.

The two main characters are shown together talking aloud and at times, to the audience ( as they know they are in a play ) - there is no conversation between the two as such, and they are accompanied on stage by an older version of them both, who also have dialogue and occasionally contradict their younger selves. They all move around the sparsely decorated stage to create different scenes, which works perfectly.

It is, both hilariously funny, and immensely sobering.

Seeing the very human side of both characters gave a lot of food for thought, from Thatchers clearly open admiration of the Queen ( and yet her inability to listen to what is really being said to her ) to the Queen's contradiction of herself ( "I never said that!" ), plus the contributions from the supporting characters to illustrate events as they unfolded ( Brighton bomb, Miner's strike, state visits )  was the perfect combination.

It was mesmerising at times, the mannerisms and vocal skills of all 4 actresses, T - Sarah Crowden, Liz - Caroline Harker, Q - Susan Penhaligon and Mags - Alice Selwyn  playing both main characters was something really special.

Costume and makeup department also got it spot on. It certainly says much about the authenticity of their look that had Mrs Thatcher booed and hissed at as she appeared on stage for the first time.

This was a hugely entertaining evening, would highly recommend catching this play before it finishes on June 1st. As ever, thanks to all staff at the Coliseum for their great work in making the theatre such a welcoming place to visit.