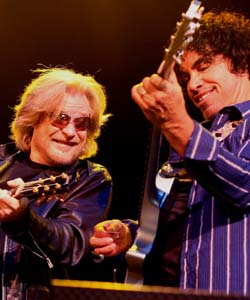 Daryl Hall and John Oates, commonly called Hall & Oates, are an american singer/song writing duo from Philadelphia. They are best best known for a series of USA no.1 hits from the late 1970's to the mid 1980's.

They scored international success with songs such as She's Gone, Private Eyes and Out of Touch, to name just a few. However, today many people might think that they are languishing in the 'where are they now?' lists.

Well, Manchester's O2 Apollo certainly knows the answer to that, as they rocked the venue to great effect and the audience loved it!

The set opened with Maneater, one of their bigger uk hits from the 1980's and it was followed up with 3 more songs from that recording era.

Daryl Hall is wearing a leather jacket, dark glasses and his guitar slung low down which he plays with swinging arm actions. John Oates is much shorter but positioned at the front of the stage his enjoyment over bounds when playing these songs.

The backing band consists of 7 musicians playing guitars, drums, keyboards and percussion. A special mention should be made of long term collaborator Charles deChant whose saxophone is a key element in reproducing that Hall & Oates sound.

This mix, combined with the stage layout and Hall's sweeping body movements is reminiscent of many videos featuring the band in a studio that where made for MTV.

The set list continues and it looks back to the earlier albums which includes some great funk/rock music. It is not long before Daryl describes how they where propelled onto a waiting world with the international success of She's Gone and this rendition sets the audience alight.

Hit after hit follows and the crowd is on its feet dancing to Rich Girl, Kiss on my List and a huge version of I Can't Go for That. The final encore is possibly their best known uk hit Private Eyes.

Not many reviewers bother to mention the venue, but Manchester's O2 Apollo is excellent, it has great acoustics and there really isn't a bad seat. Its 1930's glamour is most obvious in the auditorium and adds to the experience.

In recent years I've not heard any Hall & Oates music played but last night proved that their music is still great and highly enjoyable. Sadly like 'She' they have gone but let us hope they will be back.