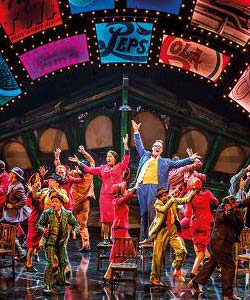 Guys and Dolls at The Palace Theatre

Guys and Dolls at the Palace Theatre

This new production of Guys and Dolls is a bit of a coup for Manchester, as it is tagged prior to West End. Unlike other shows that use these words in their publicity material, this one means it – as the show opens at the Savoy Theatre in December.

Often touring productions lose something from their Big Smoke counterparts, whether it’s a scaled down set or less starry performers. The last time Guys and Dolls was in town, Ewan McGregor and Jane Krakowski (the original Donmar pairing) were replaced by Ben Richards and Claire Sweeney, when the show visited the Opera House. The show was lacklustre and was a shadow of its former self.

This time round, the stage is filled to the brim with talent and this new production is so classy and slick – that is bound to be talked about as one of the best touring musicals of the year. Damon Runyan’s characters have become so iconic through various stage productions, and the classic film. So, if you are a fan of the material – you are in for one helluva treat. But newcomers will go home smiling too, as the performances are so engaging, that you feel as if you are watching them perform Frank Losser’s brilliant songs for the very first time.

Sophie Thompson plays the long suffering Miss Adelaide and hers is a masterclass in comedy. You cannot take your eyes off her. Recently, there has been an emphasis on playing this character as sexy and almost vampish; this dilutes the fact that the character is stuck, waiting for something wonderful to happen to her.  Thompson brings passion to the role, but plays her as a real woman; instead of a comedy stereotype. She conveys strength and vulnerability in her love for small time gangster Nathan Detroit (played perfectly by David Haig).

Jamie Parker’s Sky Masterton is charming, a player and incredibly commanding. His Luck Be a Lady Tonight is a genuine highlight, as he does not go through the motions. He sells the song and the character – bringing light and shade to the role. Siobhan Harrison takes a few scenes to get stuck into the role of Sarah Brown – the missionary who is won over by Sky. But once he takes her to Havana, the actress then has a ball and her vocals are completely spot-on. She is also an excellent physical comedienne.

Gavin Spokes also shines as Nicely-Nicely Johnson and his “Sit Down You’re Rockin’ The boat is simply sublime. This is one of those musicals, filled with such well known songs that the cast could simply ‘phone it in’ but none of them do; each actor raises the bar, which in turn raises the roof with each nuanced number.

The ensemble and supporting actors are all excellent, bringing high jinks and high kicks to the proceedings.  Each one of them delivers a fine turn, but Abigail Brodie stands out – as her role is small but she has talent to burn; bringing physicality and a superb singing voice to this already flawless production.

Peter McKintosh’s superb set and costumes take you back in time but also does full justice to Abe Burrows brilliant book. Gordon Greenberg has crafted a perfect production, which reminds you why this marvellous musical is so often revived. But this time, he has breathed life into it in such a beautiful way, that the effect is simply stunning.

Guys and Dolls is at the Palace Theatre until 21 November and it is an absolute must-see.