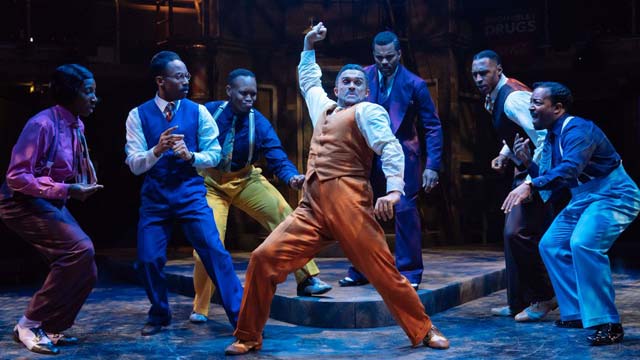 Guys and Dolls at Royal Exchange

Christmas at The Royal Exchange can only mean one thing – their annual musical! This Christmas director Michael Buffong transports the smash-hit musical Guys and Dolls to 1939 Harlem in the UK’s first all-Black cast production of this iconic show. This co-production with Talawa Theatre Company welcomes us to the famous characters of Nathan Detroit, Sky Masterson, Sarah Brown, et al.

With an opening reminiscent of West Side Story, we look forward with anticipation to a night of big voices and powerful performances. The staging is excellent, fully utilising this unique theatrical space, as we are transported from drinking den to mission hall via a club night in Havana. And Kenrick ‘H20’ Sandy’s stylised choreography impresses, however, the promise of the opening falters through the 90 minute first half. The band sound great under Mark Aspinall’s direction, but the voices never quite live up to expectation. There were sound balance issues early on (and do the actors really need to be mic’d for dialogue??) and performances are solid, but this is a show that should blow the roof off the theatre rather than rattling the windows.

There are moments of director Buffing’s promised high-energy, particularly post-interval, where the pace picks up with a particularly powerful performance of ‘Sit Down You’re Rocking the Boat’. Where Sarah Brown was a definite missed opportunity, Lucy Vandi deserves a mention as Miss Adelaide – a refreshing take on the expected bimbo-esque character of the original. She offers a fuller, jazzy interpretation that works very well and provides hilarity in her relationship with Nathan…although the biggest laugh of the night came from the audience when someone shouted ‘No Adelaide’!

Definitely worth a visit to enjoy the classic songs and be immersed in something different to the festive offerings of other venues.