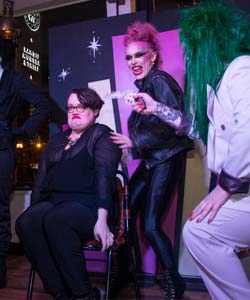 Who ever thought that a Sunday evening could be so much fun?! Well, with drag queens, hilarious games and unlimited amounts of alcohol, every Sunday can be just as fun filled from now on with the return of Gorgeous Sundays in 2017 at Bandit, Mugger and Thief.

The first instalment kicked off with hosts Liqourice Black, Violet Blonde, and Lill Queen performing an epic lip sync to Bang Bang after quite literally dragging one of the audience onto the stage for the first time in many that night.

Games of ‘Higher or Lower’ and ‘Read My Lips’ added to the fun which lead onto the final game of the night, the ‘Drag Queen Pageant’. Again bringing random people from the audience to participate in mini games to make up the winner who had to drag themselves up using clothes, make up and wigs in less than 2 minutes and get the audiences cheers which would lead them to victory.

This coming Sunday the 15th of January 2017 brings your fabulous hosts Anna Phylactic, Grace One Smith and Blair to the front of the spotlight, but not only them will be on the stage. You could be too!