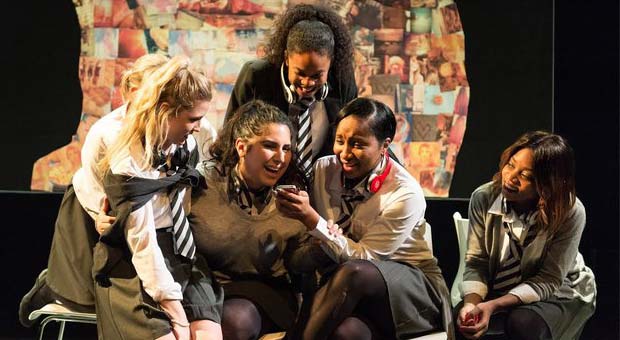 Synergy Theatre Project’s Girls Like That is a cautionary tale inspired by real-life instances of intimate photographs being unwillingly posted online.

This is a common theme in contemporary teen-centric stories, and very relatable in the wake of the 2014 iCloud hack, the most famous example of a continuous privacy problem in modern society; yet Girls Like That is a fresh take on this overly familiar tale, and one that leaves you empowered by its end.

Scarlett has been part of the same friendship group since she was five years old; yet once a compromising photo of her is shared online - ironically during a history lesson on feminism - she is quickly excommunicated by her ‘friends for life’, who then proceed to mercilessly body- and slut-shame her. Yet later, when a photo of one of the popular boys in school is also leaked, we see the usual gender inequality at play when he isn’t subjected to the same treatment as Scarlett.

In fact, while he is celebrated, Scarlett is persecuted further, as everyone believes it was her who shared the photo as an act of revenge. Scarlett’s story, which was influenced by interviews writer Evan Placey conducted with schoolgirls, is narrated rather than fully enacted by the six performers, a mix of professionals and ex-prisoners, who each portray an accurate and well-defined character.

Director Esther Baker opts for a mixture of urgent movement and lively recitation, which may leave little time for reflection, even at pivotal moments, but does give the piece a vibrant pace and, importantly, spares us from stewing too much on any one injustice.

This narrative is occasionally intercut with monologues performed by standout April Hughes, portraying some of Scarlett’s admirably headstrong ancestors as they struggle with the women’s rights issues of their respective eras. More than mere relative respites in a story that is increasingly incensing, these segments also serve to highlight the play’s primary theme: women have long fought, and continue to fight, an unjust battle against prejudice that in recent years is mostly perpetuated by other women; instead, we should all be empowering ourselves and each other.

Girls Like That is extremely thought-provoking, making every salient point on the topic, particularly exploring the similarities between the hierarchies of schools and the pecking order of chickens, and the differences between mob mentality - which is bred through anxiety and jealousy and itself begets hypocrisy - and solidarity, the sense of unity through mutual support. Yet somehow, despite the sombre and provocative nature of the subject matter, this piece manages to keep a lighthearted tone throughout.

The staging is masterfully minimalist, with only six chairs acting as both props and set, against the backdrop of a woman’s portrait, collaged from photos of people that have been publicly shared on the internet. While being surprisingly diverse, transporting us from the classroom to a swimming pool and back with swift movements and simple digital projections, this choice alongside the commentary style also focuses our undivided attention on the story while giving us an objective viewpoint akin to judge and jury - Scarlett may be on trial, but it is clear to us who the real perpetrators are in this case.

Winner of Best Play for Young Audiences at the 2014 Writers Guild Awards, Girls Like That is an engaging piece of theatre as well as a useful educational resource; it is ideal for anyone over the age of 13 who is or wants to relate more with a teenager.

A recording of the performance from its run at Unicorn Theatre in November 2014 is available to watch online for free.