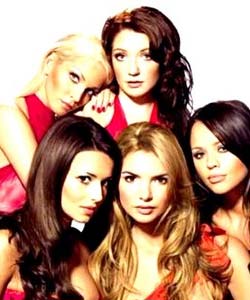 For what could possibly be their last tour, Girls Aloud reunite after a three year hiatus to embark on their 10th anniversary tour, Ten.  Performing to the first of three (nearly) sold out nights at the Arena, the crowd are more than ready for the girls after a popular support slot from Amelia Lily, and we quickly forget that they are 30 minutes late as they arrive, descending on a huge, 3D Girls Aloud sign opening with their first hit (and #1) Sound Of The Underground.

The girls plough through nearly every one of their 22 hits (21 Top 10’s), so there is rarely a dull moment. A cover of Call Me Maybe is a little pointless, but nonetheless fun. Particular highs are the middle section where as is now tradition, the girls are transported to the middle of the arena, whilst making their way through Sexy! No No No, Untouchable, Call The Shots and new track On The Metro. The outfits are as stunningly sparse for the most part, but the red Jessica rabbit dresses for the encore of I’ll Stand By You and The Promise steal the show.

Individually there is no mistaking who the star of the show is, Cheryl. Though her hair is uncharacteristically awful (huge and out of control), she is surprisingly stronger than ever before vocally, much to the dismay of ‘local’ girl Sarah Harding; Sarah makes for an unfortunate highlight as she is completely off with her trademark screech and is visibly struggling with choreography and at times actually knowing where she is: the personal problems seem to have really taken their toll. Kimberley is popular with the crowd, though vocally limited as ever. Luckily Nadine and Nicola are pitch perfect, strong and brilliant throughout with the latter really holding her own after years of being branded the least ‘glamorous’.

Though not the greatest show ever in terms of production values and staging, the girls have the crowd (of a diverse variety) on their feet throughout. They are relentlessly brilliant at putting on great live gigs, unlike many other girlbands.  They may never release any new materiel again, but will surely know that people will flock out to see them for the odd reunion tour every few years.