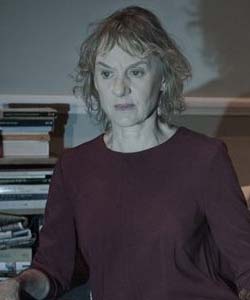 Written in 1881, early productions of Ibsen’s Ghosts scandalised audiences and reviled the press with its content of sexual indiscretion and venereal disease. In his new version, David Watson updates the setting into a modern home on the fjords.

Polly Findlay’s direction places Niamh Cusack (who takes the central role of Helen Alving) at home, going about her daily chores, whilst the audience filter in. As Helen heads into the garden, Regine (her maid) appears, and the story unfolds. We hear how Alving’s husband (now deceased) had been unfaithful throughout their marriage, and her plans to build a children’s home, not so much in his memory, but to deplete her husband’s wealth so that their son, Osvald, would not inherit anything that might tempt him into similar ways. Osvald, who had been sent away to avoid being corrupted by his father, has returned with love in his heart and a secret passed down by his father. The play concludes with Mrs. Alving having to confront a heart-breaking decision.

The huge set dominates the space, not just the stage but the auditorium – a full-size home thrusting into the stalls, and provides an uncomfortable sense of eaves-dropping on family secrets. Whilst Findlay’s direction is tidy and keeps the narrative moving, it doesn’t excite and at times allows attention to wander. Cusack and the rest of the cast are clearly actors of quality, handle the dialogue well and providing solid performances, but again, nothing excites or lights up the stage.

This is a dark piece of theatre; a story of ghosts from the past that haunt the present. However, at 120 minutes (and no interval) this is a long evening that may challenge the attention of less ardent Ibsen fans.