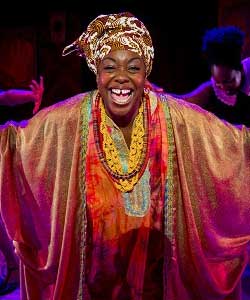 Ghost, the Musical at the Lowry

The musical adaptation of the hit film Ghost premiered in Manchester six years ago, before heading for the West End and Broadway. So, there is a great deal of good will from audiences here because it feels like our show. And, there is the fact the film starring Patrick Swayze, Demi Moore and Whoopi Goldberg has many iconic scenes.

When the show first arrives here, it featured some amazing effects by Paul Kieve. This time around, the smoke and mirrors are missing and with this omission, some of the magic is gone.

That’s not to say, there is nothing to see here, as Kelly Hampson is excellent as grief stricken Molly, and Ethan Bradshaw holds his own as Sam who is caught in between two worlds, trying to find his killer. There is a scene stealer here also, who stops the show from becoming maudlin; Jacqui Dubois. Her Oda Mae, the dodgy psychic who begins to hear the dead, is a powerhouse, in terms of comic timing and vocally. Every time she is on stage, this show comes to life.

Sam Ferriday is suitably enough panto villain to give you the binary opposition that shows like this need, as Sam’s ‘best friend’, Carl.

For anyone who has seen the show in its original form, or during the first tour, there is a nagging feeling here that things have been scaled down way too much and it feels a bit cheap. From the size of the ensemble, lack of special effects through to Mark Bailey’s wobbly set design.

There are some magical moments created by the illusionist Richard Pinner, but not enough to satisfy those who pay full whack and expect more bang for their buck.

The cast give it their all and work incredibly hard to engage the audience, and in most cases, they succeed. The narrative sticks faithfully to the movie, so fans get what they came for. It’s just a shame, that they may also feel that they need a bit more spent on the show to truly believe.

Ghost, the Musical is at the Lowry until 29 April.