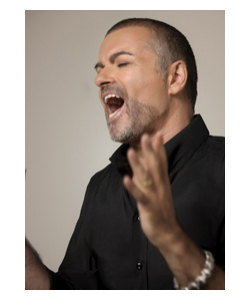 George, at almost 50 has still got and certainly knows how to use IT. That's George Michael and I'm talking about the voice; in case you weren't sure.

My companion for the evening commented on how young George's voice still sounds. I had to agree as his velvety toned voice with a hint of spice and covered in rich chocolate, filled a full Manchester Arena with songs old and new.

Accompanied throughout the evening by the superb Symphonic Orchestra,together with some stunning and memorable imagery on the massive screen behind him,George took us on a musical journey dating back to 1982.

Ok, I would have liked more songs from George's back catalogue; Careless Whisper being one prime example However, to be honest, 'True Faith' was so fabulous that George was soon forgiven for singing other covers such as ‘Going to a town’by Rufus Wainwright, ‘Russian Roulette’ by Rihanna and ‘Wild is the wind’ that came to George from David Bowie via Johnny Mathis.
Particular favourites of George’s for me included,’Different Corner’,’You have been loved’ and the triumphant rendition of ‘Freedom’ which more than any other song on the night,brought the packed audience to their feet.
‘Praying for time’ further demonstrated his more serious side with a haunting version that combined all the elements of this special evening.
.
George doesn't chat a lot during his concert and so his audience gets real value for money with his singing. That said, he has a real connection with his audience and stood still at times just so that his loving fans could get a good picture.

George proved with his renditions of standards such as,' Buddy can You spare a dime' ‘Roxanne’ And ‘My baby just cares for me’,that he will definitely be around for a very long time.

If you missed him on the 21st September then you will be pleased to hear that you can see one of the greatest world class singers that this country has ever produced on 9th October.
For details of this date and how to book..Click here.