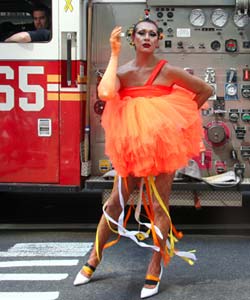 Gazelle, doyenne of the New York nightclub scene, brought the fly on the wall documentary about his life as a glamourous finale to the inaugural Manchester International Film Festival on Sunday night.

Gazelle Paulo is a Brazilian flight attendant in his mid forties who transcends the moniker of drag queen and is closer to performance artiste, creating a seemingly non-stop supply of looks and artistic statements, the streets and nightclubs of New York being his arena.  Paulo was brave enough to grant filmmaker Cesar Terranova access to all areas of his life for two years.

The film opens with Gazelle tiring of the avenues he has found for expression, namely the club scene or a glossy self-published magazine called Gazelleland. We are introduced to his many collaborators and confidantes such as Kenny Kenny, Scooter LaForge and Paul Alexander.

The imagery of Gazelle is breathtaking and the film joins him at a particularly difficult time, rebuilding his life following the death of his partner of seven years whilst fighting his own fight with HIV, Gazelle’s solution is to live each day as if it’s his last.

Terranova’s cameras follow Paulo to the doctors where he receives devastating news that he must increase his medication, to dinner parties and gatherings in New York to artists’ studios to prepare his looks for Fashion Week and Gay Pride.

The problem with the film is that it doesn’t dig any deeper. There are small nuggets which leave you craving for more such as when we meet his gay Svengali in Brazil or when we visit his childhood home. As a viewer, after half an hour of seeing his New York life, I wanted to see the flip side of the coin and to learn a little of what powers Gazelle, where he draws his inspiration and if this life truly provides fulfilment, a lot of the time Gazelle cuts a lonely figure.

However the film draws a happy conclusion as we see Gazelle has found love again and he moves towards another crossroads in his life with remarkable strength. Gazelle The Love Issue is in some ways an interesting take on life in a city where to stand still is to vanish and the struggle for individuality ever increasing but without the ebb and flow of a story, the message Terranova and Paulo are trying to convey is a little lost.