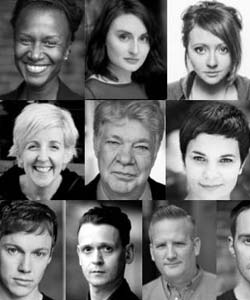 The Gap Theatre Project started as a conversation between writers, then other theatre practitioners, questioning whether Manchester needed provision for new plays which could bridge the gap between small venues of the Fringe and the established larger venues. If so, how could they help writers, actors, directors and theatre makers of the North West bridge that gap?

Out of the project has emerged Bridging the Gap - a superb collection of eight new short plays showcasing the exceptional talents of North West writers, directors and actors. In a packed St Peter’s Church, the Ancoats audience enjoyed two hours of outstanding theatre. In the first hour, Zilla takes us back in time in stages to help explain the beginning; Thigh Gap questions the reality of virtual reality; Broken Bridge provides a new take on the devil / angel dilemma; and White Man Overbite offers a hilarious look at the longevity of acting like a 20-something. The second half continues with The Gap (teen lovers meeting again as OAPs); Talking Down (facing suicide head-on); I Am Janet (frustrations of a speech-impaired patient); and Gaps (it’s all about the thigh!).

Particular mention must go to Nisa Cole (Thigh Gap) and Julie Hesmondhalgh (Talking Down) who both delivered faultless, emotional performances in their one-woman pieces; and to Jim Cartwright (Gaps) for his hysterical script starring the comic talents of Matthew Kelly and Karen Henthorn.

This is a highly recommended evening out in a hidden part of Manchester by a highly talented ensemble.

The Gap Theatre Project needs continued support to expand their work and bridge the gap. For more information:  www.theatregap.co.uk.