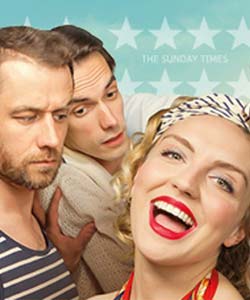 It is a play of its time and exposes the flamboyant values and misogyny of men. Romantic overtures, lies and deception frame the farcical plot. The vampish Diana has all the attention and is the domineering orbit of femininity, betrayal and anxiety.  Her Sirenesque appeal lures fresh meat onto her rocky heart and feeds on their whispered sweet nothings …. only the cad is immune.

The men, often behaving like children, brawl, frolic and comfort one another with public school camp overtones!  The comedy provokes subtle questions about masculinity and brotherly companionship.

Set in France much humour is in French and the audience can purchase, as part of the programme, a seven page translation sheet which explains the ‘French Bits’. Not easy to follow in a darkened auditorium.  If you don’t understand French some of the humour may be lost but this does not detract from any understanding of the play and in fact it acts as a metaphor for the lack of communication and understanding between the characters.

Diana Lake played by Florence Roberts is superb and uses her femininity and coquettish charm to full effect.

The play is well cast with hilarious antics from Kit Neilan played by Joe Eyre. Alan Howard is played by Ziggy Heath. This is his first professional stage role and successfully engages the audience with his stage presence, witty flair and frenetic gestures.

The beautiful set and 1930’s costumes are wonderful and high praise goes to all in the casting, creative and production teams. Well worth seeing …. If only to polish up your French!

Showing now at Oldham Coliseum until sat.Click here to book.