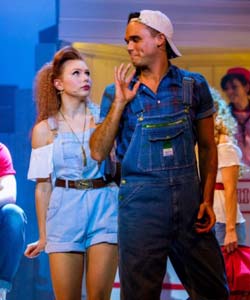 Footloose at The Palace Theatre

Footloose is a show which has always got by on its sheer energy, which makes up for the fact that the plot is throwaway. This leaves the audience clapping and cutting loose by the time of the finale.

Sell a Door have decided to scale the show down, so the ensemble is barely there and many of the cast members also play musical instruments, too. This works to a degree because Reverend Shaw’s rebellious daughter, Ariel plays piano and wears cowboy boots, which perfectly highlights the two worlds that she lives in.

Racky Plews direction feels a bit muddled, as the original piece has always been earnest to a degree, until everyone ignores the rules, following an accident in the repressed town of Bomont. This means the emotion can then run freely, as the characters dance their cares away. Racky gets all of his actors to visit ‘Goofball Island’ in the film Inside Out. So, we get mugging, where nuanced performances would have got the point across far more effectively.

Even so, Thomas Cotran’s Ren is impressive, as he has great chemistry with Gareth Gates, as the quirky and shy boy, Willard. Joanna Sawyer’s Rusty acts well but her voice lacks the power to lift Somebody’s Eyes and Let’s Hear It For the Boy to the back of the stalls and beyond.

Hannah Price is perfect as bad girl, Ariel as she conveys the fact that the character is hurting in every song, including the beautiful Almost Paradise. Scott Haining has a few small roles, but shines in all of them. Maureen Nolan’s Vi is barely there, but she does incredibly well with an underwritten role.

It is Gates, who lifts the piece, as he plays it as if the stage is filled with high energy performances. So much so, that you can see performers raising their game whenever he is on stage. His Mama Says is excellent and he has a real knack for comedy. Having starred in Les Miserables and Legally Blonde, it’s time he graduated to become a Jersey Boy – as he has the vocal chops and the talent.

Matthew Cole’s choreography is more than adequate, but there the cast is simply not big enough, to give these numbers the free-wheeling style that they deserve. And because many of them are dancing with musical instruments in their hands, it’s not long before they start playing them and dancing at the same time.

The set is so cheap and flimsy, that again it distracts. It just doesn’t marry well with the price of the tickets and you want more than tables on wheels.

So, overall the scaled down version leaves the piece feeling a tad under-powered. But the talented cast give it all they have got, and once Gareth Gates steps onto the stage, the show goes into fourth gear, as he works incredibly hard, punches his card and enables you to cut Footloose.