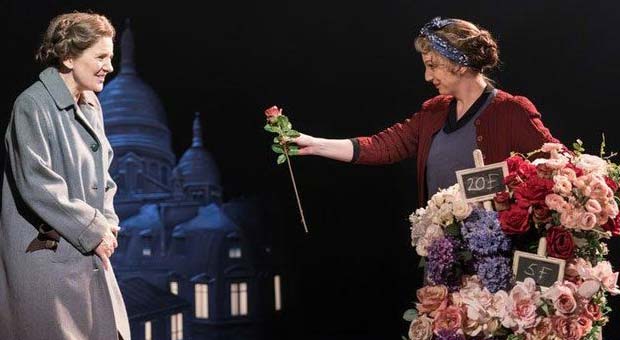 Flowers For Mrs Harris, a musical adaptation of Paul Gallico’s 1958 novel Mrs ’Arris Goes to Paris by Rachel Wagstaff (book) and Richard Taylor (music & lyrics), is the uplifting story of war widow Ada Harris, a London charwoman who has a transcendental experience on seeing a client’s ‘Ravishing’ Christian Dior dress and, with a whole lot of determination and a little help from her friends, travels to Paris to buy a Dior dress of her own.

At the beginning there is a clear sense of restlessness and missed opportunities in the air, yet Ada has accepted her lot in life gracefully. With an unwavering optimism which is likely a defense mechanism for her extreme loneliness, Ada’s only flaws seem to be that she is too kind, regularly putting others’ needs before her own, and endearingly naive. This makes Ada a likeable if not entirely relatable protagonist. Every other character starts out the polar opposite, selfish and petulant; but one by one over the course of the piece, Ada melts them like butter without even turning up the heat.

Seeing the Dior dress wakes Ada from the trance-like state she’s been living in for years. Suddenly she has a new purpose, a reason to live and to fight. According to Victor E. Frankl, the meaning of life is to have a purpose, and by having a clear 'why' we can endure anything in its pursuit. Ada Harris is the fictional personification of this theory. On finding her purpose she is permanently changed, trying to convince her other clients - who are all reluctant to follow their own dreams in one way or another - that ‘there is more to life’. Her friend Violet can’t understand this sudden change at first, but soon (and a little too easily) Violet changes her mind, and supports Ada as she rations food and works her fingers to the bone for years, every day coming closer to fulfilling her dream.

You see, this is not just a dress, it is a representation of Ada’s loneliness and longing - having one of her own would give her ‘something to come home to’. Yet we never once pity Ada; she is the epitome of strength in the face of hopelessness, from whom a strong sense of hope pervades and builds throughout the piece. Her determination and courage in following her dream is inspiring and succeeds in touching the heart. Unfortunately the supporting characters in the first act are without exception irksome, which takes away from an otherwise moving personal journey.

The much stronger second act takes place in Paris, where the Parisian characters parallel their British counterparts in a way that is reminiscent of The Wizard of Oz. The proverbial fish out of water, Mrs Harris is not in Battersea any more; and although she is initially shunned by the Parisian bourgeoisie due to her lower class, her almost cardboard positivity soon wins everyone over; in fact, it turns out that they are all much more compassionate than anyone she knows back home.

The piece’s greatest weakness is an inherent lack of conflict and therefore overall tension. Any conflict is resolved so quickly that the peaks and troughs of the narrative feel shallow. That is, until Mrs Harris returns from Paris. Her selflessness is detrimental again, and all seems lost - a predictable set-up for a cathartic climax resembling that of It’s A Wonderful Life, reminding us that we are never as alone as we often convince ourselves.

As with It’s A Wonderful Life, I have a fundamental criticism with this ending: it is reasonable to conclude that such a kind and caring person as Ada is loved and appreciated, but is that relatable? Who in this world is as sympathetic and seemingly flawless as Mrs Harris? Personally I await the day we see the misguided, frustrating character (in this case, Ada’s client Pamela) discover that they are loved despite their mistakes. After all, it is easy to love those who love easily.

Flowers For Mrs Harris isn’t a conventional musical, as the music is interwoven closely with the dialogue. For me this is a refreshing stylistic choice which benefits the flow of the piece. The minimal staging is magically diverse; a revolve is used to simulate Ada’s urgency and lack of control during certain scenes, which in comparison gives the stationary segments a sense of stability. The cast of ten are a perfect ensemble, while Clare Burt’s portrayal of Ada Harris gives the role the dualism between melancholic tenderness and an inner fire that it requires. Overall, Flowers Forthat I would recommend to all ages.

Originally produced by Sheffield Theatres in 2016, Daniel Evans’ 2 Mrs Harris is a fun and heart-warming if rather convoluted piece of art 018 production at Chichester Festival Theatre is available to watch online for free until May 8th.