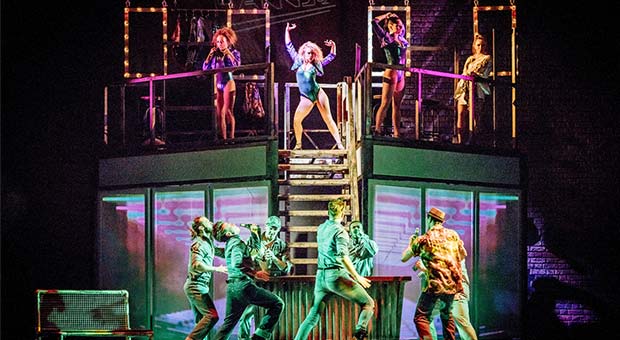 Flashdance at the Palace Theatre

The story of a female welder who dreams of dancing like she’s never danced before.

Alex Owens is played by Joanne Clifton, and with her pedigree as a professional dancer on Strictly, you expect her to be able to provide Alex with the moves. She hits the heights vocal too, and she is a credible actress, and can really hold an audience.

A1's Ben Adams has likeability, which means his Nicky Hurley lacks the nasty edge of a boss, who has to get rid of staff, but even so, his chemistry with Clifton and his smooth vocals, mean that he is always watchable.

The plot is ridiculous, but it always has been. Flashdance was one of those high concept movies from the 1980’s, which had montage sequences, and pop video style cinematography, all with the desire to sell a soundtrack. And those hits are delivered with panache by Hollie-Ann Lowe, Sia Dauda and Demmileigh Foster, including Maniac, What A Feeling! And Manhunt.

This show offers you pure escapism, and you do need to leave many of your critical faculties at the door with your coat, otherwise, you’ll fail to enjoy it. As a nostalgic look back at how simplistic life was through the filter of high vis work out apparel, the show works a treat.

The pacing could be better, as too many songs mean that some of the sub plots are lost. Gloria and Jimmy’s two parallel stories, where they each seek fame, are barely there, as the show focuses on Alex and her quest. And there is too much time spent with the welder’s and their plight.

Clifton lifts the material and runs with it and she has fun, which reaches out to the stalls and beyond. And there are some other terrific dancers in the show, including Alex Christian and Simeon Beckett, who remind you what you thought you could do in the 80’s! If only, eh?

It may be a guilty a pleasure, but Flashdance is one of the shows invented for the weekend, so take your pals, some Babycham, leg warmers and your passion, and you too could be making it happen in the brilliant finale.

Flashdance is at the Palace Theatre until 17 February.