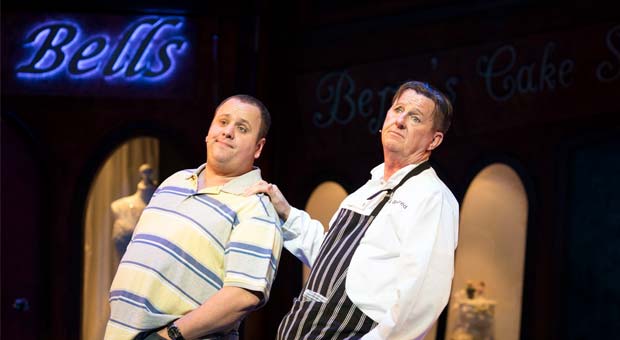 Fat Friends at the Opera House

This Kay Mellor comedy drama began life as a TV show, starring Ruth Jones and Alison Steadman, as the mother and daughter battling with their weight, with a host of other characters, at a slimming club.

In the musical version, the brilliant Jodie Prenger, plays the protagonist Kelly, and even though, the show is not subtle and it tends to veer into caricature too often, it does have a super-sized heart. Kelly is getting married to daft as a brush boyfriend, Kevin (played with genuine charm by former cricket player Andrew Fintoff) and she needs to lose weight to get into her dream wedding dress.

The plot could be written on the back of a low fat Go bar wrapper, as it is virtually non-existent, and it cannot hope to cover anywhere near the depth of the TV drama, as the spotlight would often fall on different characters, and their plights. Here, the focus is on Kelly in the main, but there are too many characters all jostling for your attention, with underwritten roles.

Sam Bailey does well as Kelly’s mother, even though the word “Luv” is thrown in so many times, to prove that her character is Northern so many times, it verges on parody. She can sing, as we know and she deserves stronger songs than the ones she is given here.

Natalie Anderson’s Slimming Club franchise manager, Lauren is a great character, as she embodies what is wrong with this industry, as it plays on people’s guilt about food. And the actress acquits herself very well and sings up a storm.

Flintoff has genuine stage presence and comic timing, sure he looks awkward when he is singing, and if he were not a name, you would probably forget him. But, he is far better than you would expect, and the warmth of his personality comes across, even if the part of the daft boyfriend is not a stretch. I really enjoyed his performance, and would love to see him on stage again.

Jodie Prenger lifts the material, and her vocals are spot on, she knows how to project and on several occasions, she brings the flat songs to life. Her exuberance and terrific talent do bring something special to the piece.

This musical is about 30 minutes too long, as the songs slip past by you, with many similar to the last one. They do not have the clever touches that the late great, Victoria Wood would have provided.

And, even though the cast hit the heights vocally, the show itself is fun, and perfectly pleasant, like a slim fast shake, it is no substitute for something more substantial and filling, such as the poignant and funny Brit hits, Spend, Spend, Spend and Gary Barlow and Tim Firth’s The Girls.

Fat Friends is at the Manchester Opera House until 24 March.