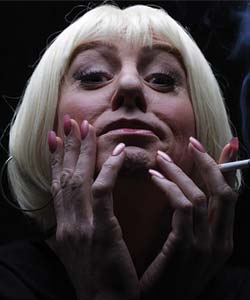 Thursday evening and your Canal Street Correspondent was whisked off to Weatherfield for an evening in the company of Fat Brenda,  the legend of Coronation Street’s Streetcars’ switch.

Fat Brenda is Weatherfield's often mentioned yet never glimpsed Streetcars' employee.  We join Brenda as she moonlights the evening shift for rival “Go-La-Cabs” waiting for the arrival of her new  fella “Bob_69_69”.  Brenda met Bob_69_69 on “Twitter”, and he has promised her a better life.  But will she finally be able to escape Weatherfield or do all roads lead back to the cobbles?

Brenda shared with us her world, her thoughts, fantasies and beliefs while she prepares to change her life forever. We were immersed in Brenda’s world dancing, singing, tweeting, smoking, bingo and God's representative on earth Cliff Richard!
In this one (wo)man show Fat Brenda is played Actor Steve Huison best known as layabout cab driver Eddie Windass of from Corrie (and the love of Brenda's life) until the character was axed last year. The play is the first piece from production company ‘Flamin’ Beltin’ Productions’ whose founders include Huison and Joseph Parkinson who has penned the play.

Fat Brenda is a complex, sensitive and comical character.  Though her, Corrie fans to delve into a side of Weatherfield that has never been witnessed before.  Once he had got into his stride (and after an early prompt), Huison played Brenda with warmth and with pathos.  The mix of humour and melancholy was well balanced and in the main well timed , creating at times hilarity and at others sympathy for Brenda and her tragic life story.

Highlight of the evening was Fat Brenda’s hilarious rendition of Madonna’s vogue.  This had your correspondent and the rest of the audience doubled up laughing.  Bingo at the beginning of the Act II went down a storm with enthusiastic shouts from the onlookers of “HOUSE”.

Credit goes to writer Joseph Parkinson, the script was well constructed and held the interest of the audience.  This together with considered direction from Theresa Smith, helped Fat Brenda to become totally believable.  Mention must be made of Fat Brenda’s choice of costume, including the Mrs Cliff Richard T Shirt, denim skirt (which may have fitted twenty years ago) and pink leggings added for Brenda’s “Zumba” class.

The production was simply yet effectively staged; the audience clearly enjoyed their evening with Brenda and rewarded her with a standing ovation.  This production should do well and will appeal not only to Corrie fans as it continues its national tour.