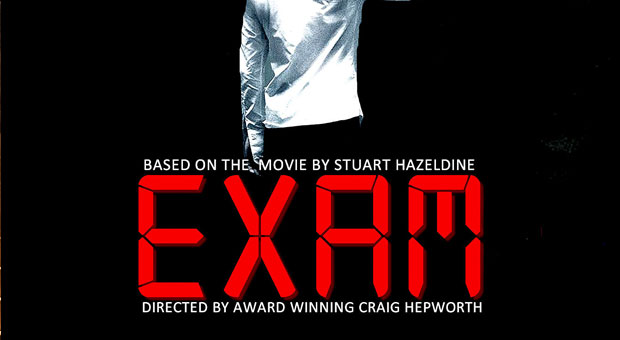 Exam at the King's Arms, Salford

Back in 2009 Exam was written, produced and directed by Stuart Hazeldine as an independent film and released to some acclaim and several award nominations. After it's release Vertigo's co-founder felt it had aa very theatrical feel and was able to do a small test production in 2012. Seven years later and Craig Hepworth has brought it back to Vertigo, worked on and developed into an eighty five minute, one act tense psychological thriller.

From here the plot develops into a rather macabre twisted tale as the eight is slowly reduced to two. The candidates try many things to find out what the question is, so they can find the answer, but none are successful and violence becomes prevalent.

Director Craig Hepworth makes a cameo appearance as Candidate 1, leaving a very strong cast of candidates behind him. John Mackie as Candidate 2 was very powerful in his portrayal of the narcissistic 'hard man' but ably matched by Haydn Holden the other 'alpha male' among the candidates. Gavin Stamper is excellent as Candidate 3, initially much milder mannered than the other two but his transition into desperate man is empathic and beautifully done. Nicola Fisher is Candidate 4 and Rebecca-Claire Evans' Candidate 5 are both nicely drawn characters with depth.

Celine Constantinides makes Candidate 6 a strong woman but with an empathy for others that her companions lack while Andrew Marsden's Candidate 8 is quiet but disturbing in his own way. Steve Connolly as the invigilator has a latent menace about him while Connor McKinney's guard is a principally non speaking role.

As ever Vertigo take the small space in the King's Arms and make you believe that you are in a much bigger venue with their clever set design enhanced by Karl Burge's visual effects and Craig's lighting design.

Exam is a dark perverse play, bringing the possibility of what people are truly capable of in a pressurised situation to the fore. The directing is skillful and creative, with the action moving along at a fair pace as the exam countdown continues but never feeling rushed. The production is pretty much sold out for it's run but if you can beg, steal or borrow a seat, it is a play that should be seen.

This is Vertigo's last main production in Manchester and is a real high to boost their move to London and bigger audiences. However Manchester will be much the poorer without this innovative and amazing company.