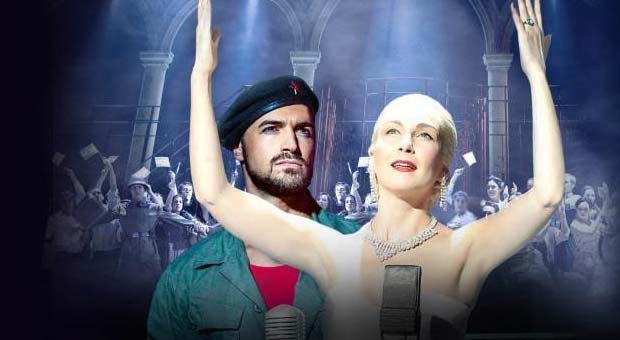 For many, Evita is one of those shows that they can watch time and time again, and never get bored. And, there are many reasons for this; it is a musical based on the life of Eva Peron, the First Lady to President Juan Peron, it has memorable songs, which have bite to them, and it is beautifully staged.

With populism on the rise, and politics leaving many in this country feeling quite cold, and disenfranchised, there is no better time to see this stunning musical. Eva Peron is a naive young girl, when we first meet her. But, she soon learns how to get what she wants, and this revolves around the men she dates, and dispenses with, like an old iphone, in search of a better model.

Oscar Balmaseda makes a marvellous Magaldi, as he is in great voice and turns a supporting role, into a character that you long to see again. Cristina Hoey is also excellent as the Mistress, who Eva displaces, leaving her to sing the beautiful "Another Suitcase, Another Hall." Jeremy Secomb plays Peron, with a real sense of gravitas, but also vulnerability, as he needs Evita to secure his place in politics.

Madalena Alberto starts slowly as the title character, and she has to do a great deal in 2.5 hours, as this is a character who is conflicted, and the role requires a really versatile performance. By the time this mesmerising actress, sings some of the classics, such as "Don't Cry For Me Argentina", you cannot take your eyes off her. To feel sadness for such a manipulative character, takes a great performer, and Alberto manages to make many in the audience cry, due to her excellent vocals and illuminating stage presence.

Gian Marco Schiaretti has the look of Peter Andre, and the voice of Ricky Martin, he brings a pop sensibility to the character of Che, the narrator who is rarely off stage, and again he is excellent.

This is an excellent company, as they manage to breathe life into a classic musical, that many in the audience will have seen before. But, whether you are already a convert, or a newcomer, Tim Rice and Andrew Lloyd Webber's Evita is as good as you have heard, and has not dated, and with performances as good as these, you are in for a treat.

Evita is at the Palace Theatre until 9 December.