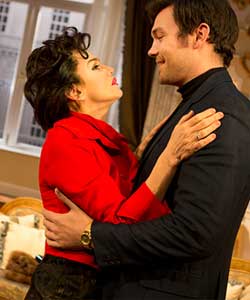 End Of The Rainbow at Manchester Opera House

End Of The Rainbow at Manchester Opera House

Lisa Maxwell stuns in a funny and heart-breaking turn, as Judy Garland.

End Of The Rainbow is a warts and all look at the life of Judy Garland. Instead of the usual bio pic style treatment, here we glimpse the last few months of her life in 1969.

Previously played by Tracie Bennett to great acclaim, this is a tough role to play – as fans have a ‘version’ of Judy in their heads and Lisa Maxwell’s unflinching turn captures the star's erratic behaviour, caustic humour, addictive personality, tremendous talent and her sense of longing, with panache and poignancy.

Rewind to the late 1960s and Judy Garland is the star that she always was, in the eyes of many of her gay fans. So, her manager/husband to be - Mickey Deans (Sam Attwater) takes her to London to perform for six weeks at Talk of the Town. Fans gather in anticipation and the press swarm like bees to honey. Meanwhile Judy has debts to pay.

Lonely, dependant on drink and drugs and feeling like a performing seal - Judy needs a friend and he arrives in the form of her pianist Anthony Chapman (played to perfection by Gary Wilmot). He offers her a shoulder to cry on and steers her down the right path. As a gay man, he has admired her for years and respects her, but is troubled by how ill she is becoming.

End Of The Rainbow is a gritty, funny and troubling treat, troubling because you cannot help make comparisons with the likes of Amy Winehouse and Michael Jackson. Exploring the idea that the ‘star’ belongs to the people and they will ‘perform’ whatever the cost, makes for uneasy viewing.

It is also disturbing because Judy had a difficult and miserable life towards the end and for many, that’s what made her so fascinating when you saw her perform live. This is far from a juke box musical, although you do get to hear some classics performed with genuine grace by Lisa Maxwell.

Wilmot is as good as you would expect, and his scenes with Maxwell, as the fallen diva are electric. Attwater is suitably controlling as Mickey – who is out for all he can get. Maxwell is the revelation here, as her performance is tremendous. She holds you in the palm of her hand for over two hours and captures the haunted look in Garland’s eyes, even when she is performing.

Formerly one of ITV's ‘Loose Women’, Lisa was nervous about tackling this difficult role, she need not have worried. This is a performance of such magnitude that it will remain in your memories for years to come.

Peter Quilter has written the most remarkable play, as it is claustrophobic, very funny and yet, it explores the concept of the ‘star’ with so much truth - it bites.

Daniel Buckroyd’s direction is faultless, as the pace is almost perfect. During the first act, there are a few false endings and it might have been better to end on an upbeat musical note to surprise the audience in act 2, but otherwise - this is a classy play.

Somewhere Over The Rainbow lies heartache, loss and pain in this beautifully drawn play. And you don't have to be a lifelong friend of Dorothy's to enjoy it. A must see!

Over The Rainbow is at the Manchester Opera House until 7 May.

Over The Rainbow is at the Manchester Opera House until 7 May.