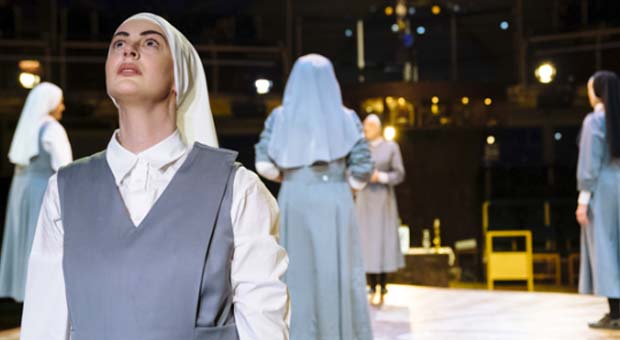 The world premiere of Tim Foley’s Burntwood prize winning play, Electric Rosary, has arrived at the Royal Exchange Theatre and not only is it electrifying audiences’, but it also questionswhat it means to be a human in today’s world. This production is sharp, timely and gloriously funny as it brings nuns and robots together on the Royal Exchange stage.

Directed by Jaz Woodcock-Stewart, ELECTRIC ROSARY sees the world of prayers and hymns collide with that of glitching and binary and this brand-new piece of comedy writing does not disappoint.Behind the crumbling walls, the sisters of St Grace Convent are dwindling in numbers, divine inspiration is at an all-time low and a council-funded robot-nun has just been invited to join their convent.Set in a time where nuns are scarce, and robots are commonplacethis new play explores how artificial intelligence influences what we choose to believe in and what it is to be human in tomorrow’s world. With faith, spirituality and humanity alongside technological advancement and a robotic future, Mary, the council-funded robot, is played with such precision by Breffni Holahan who is joined on stage by Suzette Llewellyn, Olwen May, Jo Mousley, the fiery Yandass Ndlovu and the wonderful Saroja-Lily Ratnavel who plays Sister Theresa and completes the witty dialogue with her over eager personality and infectious clumsiness.

The miraculous vision in the second act is beautifuland overall, this production is tender, honest, and insightful and practical and surprisingly funny manner. At times the outside world knocking at the convent dooris alarming, but The Royal Exchange aims to bring audience together in a shared and imaginative way, and with its collision of religion and technology it is does not disappoint.The combination of tradition and innovation makes this not only thrilling but an incredibly interesting production.

ELECTRIC ROSARY asks what faith really means in the age of artificial intelligence and what it is to be human in tomorrow’s world. Is a council-funded robot nun the answer to prayers at a convent in crisis? Found out in this thrilling and ambitious production of ELECTRIC ROSARY thatis at the Royal Exchange Theatre until 14 May.