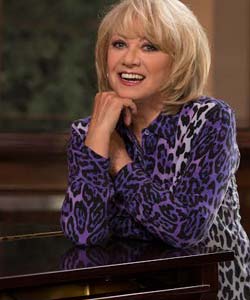 Our first lady of musical theatre Elaine Paige appeared recently at The Bridgewater Hall and we were there.

The evening started with a glass of nicely chilled white wine in the ground floor bar which like the main auditorium was spotlessly maintained and serviced by lovely, friendly staff. The Bridgewater Hall is always a pleasure for me as the seats don’t assume I am of the same stature as Elaine Paige and afford my long legs, comfort.

Ms. Paige along with her excellent backing group, The John G Smith Band, provided me with a very memorable evening. Together, they put on a wonderful show and we were taken on a journey of her biggest musical influences. As Elaine started her career in the sixties and seventies, these influences included the likes of,  Harry Nielson, Jim Webb, Lennon & McCartney, Paul  Simon, Carole King, Burt Bacharach, The Eagles and Bread to name but a few. Elaine performs each song with great feeling and expression and her musical theatre background means your eyes never leave her.  She may be diminutive in stature but she is massive in presence.

The audience were given some fantastic renditions of ‘The Guitar Man’, ‘Yesterday’, ‘One Fine Day’, ‘I Know Him So Well’, ‘Macarthur Park’ and of course ‘Memory’. She interspersed these with little anecdotes about being wined and dined by Paul Simon, rehearsing in a barn with Paul McCartney and recording a duet with Barbara Dickson while they were in different countries.

The audience were left in no doubt that she is a true fan of the songs and the people whose music she is performing.  When you combine her voice with a piano, double bass, sax, a guitar and drums, it evoked the atmosphere and sound of late night radio for me.

Her tour continues with dates up and down the country until the 18th December when her tour ends with the final concert at London's Drury Lane Theatre. Tour dates and tickets here:http://www.gigsandtours.com/tour/elaine-paige/

The whole night oozed class and Elaine’s voice belies her age as she celebrates 50+years in the business. The evening finished with a spontaneous standing ovation by the vast majority of the audience.