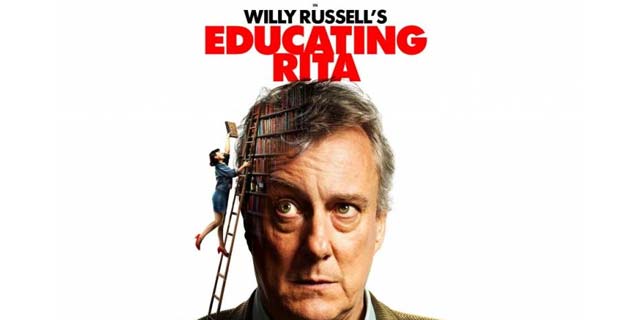 Educating Rita at The Lowry

This revival of Willy Russell’s Educating Rita at The Lowry’s Quays Theatre is a great success. I suspect most people who are familiar with the play know it from the film, but the stage version is more intimate and you feel closer to the characters mentally. I was wondering if it was going to be brought up to date a bit with modern technology but this isn’t the case. Rita writes her essays by hand – unthinkable these days – and there isn’t a mobile phone or tablet in sight.

Stephen Tompkinson plays Frank, the overdrinking lecturer with a rather negative outlook on life, and Jessica Johnson plays Rita, the Liverpool housewife who is looking for a way out of her humdrum existence via poetry. The characters are played well and rival their film counterparts, and although this Rita isn’t quite as “scouse” as Julie Walters was, she is just as convincing. Rita’s rise from bored hairdresser to star pupil is sympathetically mirrored by Frank’s fall from grace.

People have a rather personal relationship with their hairdressers. Russell was one initially and this possibly gives him his unique insight into people, especially his female characters – think Shirley Valentine here too. We feel the joys and pains that Frank and Rita experience with their off-stage partners, and feel for them both during their respective domestic breakdowns. Rita’s is caused by her quest for freedom. Frank’s is more or less inevitable.

Initially it is Frank firmly in the driving seat and imparting knowledge, not just of poetry but of life as well. As the play progresses things switch subtly, and at the start of the second act it’s the much more confident Rita who has the upper hand. In addition to the laughs though there is seriousness, and sometimes bitterness. It’s all done well and at the end you can’t help feeling sympathy for Frank as he’s packing his books. Things finish on a happy note though, and the tumultuous applause was certainly deserved.

Educating Rita continues at The Lowry’s Quays Theatre until May 4th.

More details and to book here.