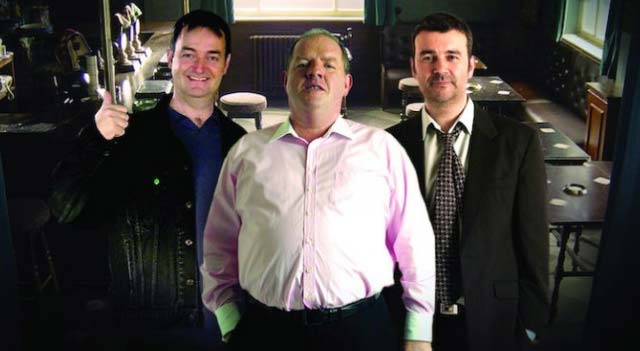 Early doors at the lowry

Starting out at the Lowry’s Quays Theatre, then taking in Manchester Arena as part of a national tour, Early Doors returns to the Lowry’s larger auditorium – the Lyric Theatre. The TV version may have shut its doors 15 years ago, but The Grapes pub is alive and kicking in this nostalgic production.

The Early Doors star-studded cast delight in this new story by writers Craig Cash (Joe) and Phil Mealey (Duffy), in which landlord Ken (John Henshaw) is planning to propose to girlfriend Tanya (Susan Cookson), a secret that soon all the pub locals know about. As each character entered The Grapes, they were enthusiastically applauded by the audience, a welcome home to familiar faces. The packed house lapped up the situations, the jokes and joined in with the famous catchphrases. The scenes with Phil (James Quinn) and Nige (Peter Wright) as the useless bobbies were a particular highlight, using any excuse to drink rather than work, yet thinking they are indispensable in the force: after all Crime can't crack itself!. Listen out for the police radio phonetics – spelling a different word each time.

As a fan of the original TV series, I was apprehensive about how it would work live on stage. I was not disappointed – this is an hilarious evening’s trip down memory lane; Northern boozer, Northern humour; Northern delight.