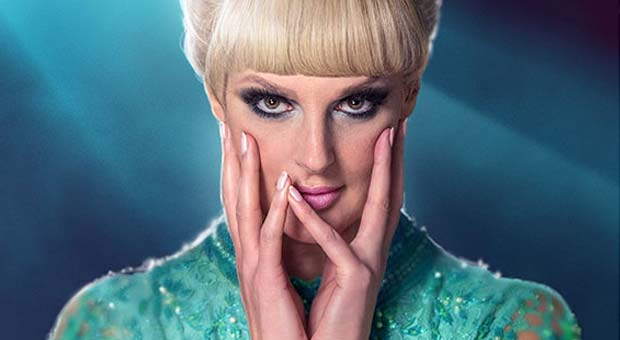 Dusty at The Lowry

Those of us who lived through Dusty Springfield’s heyday will enjoy this show. It doesn’t tell us much that we didn’t already know about her life, which was a textbook example of crashing and burning after having had it all. She didn’t just burn the candle at both ends, she actively took a blowtorch to the middle. The phoenix rose from the ashes for a brief while but she still died far too young – from an aggressive breast cancer – just short of her 60th birthday in March 1999.

Her early career with the Lana Sisters isn’t mentioned. The timeline starts from her split from The Springfields, and soon becoming an international star. The only setback, in 1964, was being deported from South Africa for performing before an integrated audience.

Dusty’s sapphic tendencies are presented neither pruriently nor with triumph. She was her own person (to the end). Very early on in life she was nicknamed Dusty for playing football with the local boys and was considered a tomboy – a phrase not used much in these more enlightened LGBTQIAC days, but those are her own words. The relationship with her slightly alcoholic and distant mother Ray (Roberta Taylor) is portrayed well.

There are some good musical moments, usually when Dusty (Katherine Kingsley) is singing. Other members of the cast, notably Lois (Joanna Francis), sing some of her better known hits well too, although sometimes the context is a bit contrived.

As well as her rapid rise to fame, we see the equally rapid descent. The drug addiction and self-harming are dealt with, but the suicide attempts are mercifully glossed over. The lowest point comes with her being locked up in a psychiatric ward in New York, from where she is rescued by one of her dressers, who has paved the way for a comeback with the Pet Shop Boys. “What Have I Done to Deserve This?” follows, with a gutsy rendition. The voice is still there, but her looks are fading and the previously well coiffured hair is now slightly wild.

Her death is the least convincing point in either act, but the finale was superb and had everyone on their feet.

Notable mentions must include the band members, who are very good, and who sometimes form part of the cast when Dusty is in the recording studio.

The set is very versatile, and the use of projection to display various parts of her tour locations and flights is good, with clever little things like taxi journeys depicted almost cartoon like.

Dusty continues at The Lowry until July 28th.