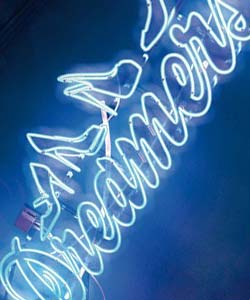 A BRAND new all-female musical with a mix of original songs and ‘90s classics comes to the Oldham Coliseum this month to tell the story of small town nights with big hearts and glorious female friendships.

In ‘Dreamers’, every weekend a group of young girls shake off the weekly grind with a messy night on the town. It’s Friday night, the weekend, they’re in love, hopeful and optimistic.

All they know where the evening will start. Dreamers, the smallest nightclub with the biggest tunes.

Now twenty years on, those nights still hold mixed memories to a scattered group of women who long to be the dreamers they once were and shake off the terrible hangover of the past.

The cast features Sally Carman, a regular in Shameless as Kelly Maguire and in Prisoners’ Wives as Kim Haines and Rachel Austin, who has played Sophie Lancaster since 2012 on both stage and screen in Black Roses: The Killing of Sophie Lancaster.

They are joined by Olivier Award nominee Rachel Leskovac, who has been seen regularly on television screens in Happy Valley and Coronation Street, and Coliseum pantomime regular Justine Elizabeth Bailey.

‘Dreamers’ is actually based on an actual night club in Oldham that closed in 2000 and which was frequented at the time, by writers Cathy Crabb and Lindsay Williams.

Every small town had a night club like this where women (and men) went to dance and kop off. Dreams of escape from boring jobs & home life dominate the narrative... The story is both moving and funny, with some great songs,which are equally well sung by a strong cast.

Cathy Crabb has written extensively for the stage including Beautiful House, Moving Pictures and The Bubbler.