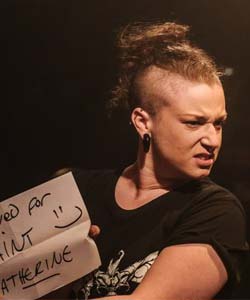 Based on the story of “the world’s first drag king” Joan of Arc, the 15th-century French teenager who dressed as a man, takes you back in time, bravely battling England during the hundred year war, then being captured by the English and ultimately burned as a witch at age 19.

Cleverly woven through this known narrative is Joan’s discovery of her own identity, the confidence she finds in men’s clothing, her armour, and her failures when attempting to fit social norms. At the beginning of the 72 minute show, we see an uncomfortable, hesitant Joan reserve a seat for Catherine - Saint Catherine who instructed the infamous heroine to support Charles VII and recover France from English control.

But history lesson aside, Joan is about the courage involved in realising your own identity, and the challenges of not living up to the one expected, skewing notions of masculine and feminine and all in between in Joan’s perfect disguise.

Seen from another angle, Joan is simply a young girl fighting the restraints of growing up using this historical plot line as her escape.

With clever costume changes and a little help from the audience Joan transforms into daughter, father, mother, angel, witch and warrior.

A thoughtful show about acceptance, gender and the quest to find our own identity.

More about the festival.