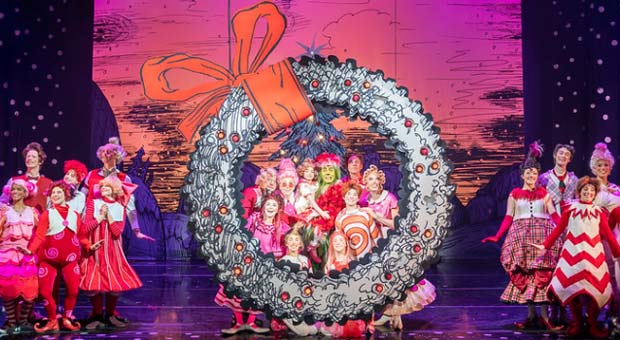 Dr. Seuss’ How the Grinch Stole Christmas! The Musical

In 2000 Jim Carrey brought to life the classic Dr. Seuss character in the award-winning festive hit How the Grinch Stole Christmas. The subsequent Broadway stage musical has toured across the USA and now lands at Salford Lowry’s Lyric Theatre as part of its UK premier tour. Starring Griff Rhys Jones as Old Max and X Factor’s Matt Terry as Young Max, this is the tale of a lonely man out of touch with the local people, and who, annoyed by their happiness, sets out to ruin their lives. A topical scenario for election night, the Grinch sets out to cancel Christmas and bring misery to the residents of Whoville.

Edward Baker-Duly is excellent as the green villain of the title, suitably miserable in his determination to steal the village’s heart, and every trace of festivity; and Jones and Terry work well together as the Grinch’s sidekick dog Max, the older one looking on at the enthusiasm of his athletic younger self. But the star of the night, is the young Isla Gie as Cindy Lou, the petite Whoville child who melts the Grinch’s heart. Having already toured as young Eponine and then Cosette in Les Misérables, Isla was a star tonight and is a definite star of the future.

John Lee Beatty’s stage design impresses like the opening of a 3D pop-up book – straight out of the pages of Seuss’s original illustrations; and the orchestra, under Richard John’s musical direction, belt out the music. However, the songs are quickly forgettable, and the overall production lacks the magic we come to expect from the Lowry. This is a very polished production and there are moments of humour, but the evening overall felt a little too grown up for its intended audience, with those younger members losing interest.

Putting the Grinch in me aside, Whoville reminds us that Christmas is not about the presents, sweets and gluttony; take away the commercialism and the community come together in the true spirit of the season. Whatever else is happening in the world, whatever Grinch may be smiling at their good fortune, don’t let them spoil your festive season. Christmas is a time to celebrate family, friends and good cheer. As Dr. Seuss has shown, even the grinchiest of Grinches can change for the better.

Merry Christmas one and all!