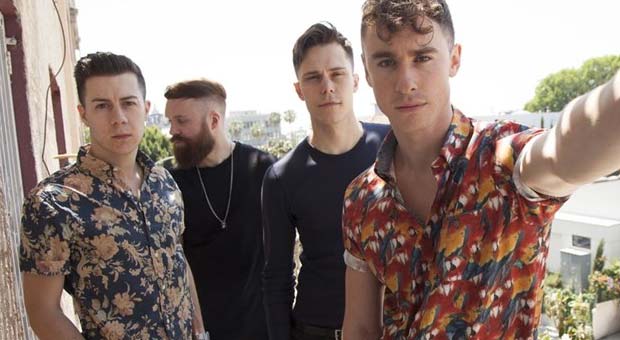 The sound checks alone for Don Broco built an incredible anticipation in the crowd, and you could feel the excitement as the audience waited for the 4-piece Bedford rock band to emerge from backstage. There was a powerful release of energy in the forms of jumping, screams and cheers, as frontman Rob Damiani stepped on to the stage alongside guitarist Simon Delaney, bassist Tom Doyle and drummer/vocalist Matt Donnelly. They were not going to disappoint at their sold-out gig in the Manchester Academy: one of the later stops on their February 2018 UK tour.

The moment they opened with 'Pretty', from their 2018 album 'Technology', the crowd exploded with energy. So many were instantly caught up in the hypnotic rhythm that the band flawlessly produced. Excellent sound design meant your enjoyment of each element was unimpeded: the delectable bass tone; the crystal-clear snare drum hits; Rob’s and Tom’s beautiful harmonies and Simon’s precise chords and arpeggios. Punchy mids and palpable lows kept the crowd bouncing, dancing and moshing throughout as the band moved seamless between songs from their albums 'Automatic' and 'Technology', even throwing in the title song 'Priorities' from their debut album.

Energy was radiating from the crowd with mosh pits forming and dissolving as the band raised the tension and released it with catchy choruses and synchronised lighting. Due to the wide venue most of the audience was able to become caught up in this elegantly co-ordinated mix of energy, lights and music. And if it all became too much, the wide venue also meant that it was easy to relocate to a less densely packed area for a quick breather.

Don Broco took their audience on an exhausting but exhilarating journey through their back catalogue, from their 2015 hit, 'Fire', to powerful new songs like 'Technology'. They reached a huge climax with 'Thug Workout', a song that drew out the last morsels of energy from everyone in the crowd: enough to get them to hit the floor and pump out a few push ups to round out their workout of dancing and moshing through the night.

As the band finish their UK tour and move on to their March tour in America I’m sure they will continue treating many venues to their energy and excellent sound. They will also be returning to the UK in April and May with 10 more gigs lined up at various locations. Keep an eye out for tickets if you would like a chance to experience a set that has enough energy to get hundreds of people to get on the venue floor and crack out some push ups.